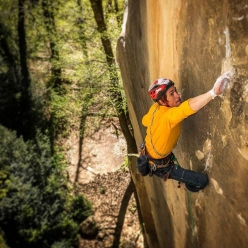 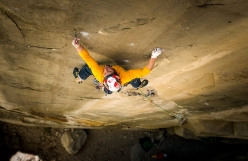 At Annot in France James Pearson has made the first ascent of Le Voyage, a trad climb graded E10 7a that might well be one of the hardest single pitch pure trad routes in the country.

For those not used to trad climbing, E10 7a may seem like some absolutely incomprehensible letters and numbers. In some ways they are, even for the Brits who have invented this grade system that combines a route’s danger with its pure technical difficulties. Even the best trad climbers don’t fully agree on how they work, especially towards the top end of the scale where there seem to be a thousand little nuances. To simplify things as much as possible though, difficult trad climbs can broadly speaking be split into two categories: difficult and dangerous (testing both physically and psychologically) or difficult and safe (read acceptable risk).

It is in this latter category that Le Voyage belongs. Freed recently by James Pearson at Annot, this 38 meter line at the La chambre du roi sector had been attempted unsuccessfully in the past by the locals who pointed the Englishman to the route. For over a decade Pearson has been considered one of the most expert trad climbers and he enthusiastically described the new route climbing traders, described it as "he best new trad route I have ever done." Important words for might well be - with its incomprehensible grade - one of the most difficult pure trad climbs in France!