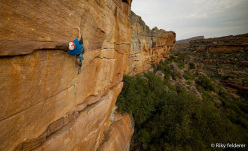 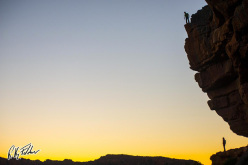 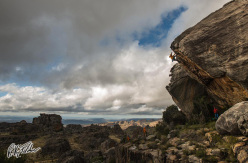 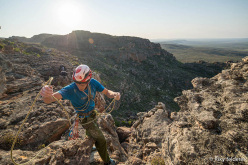 From 19 June to 9 July James Pearson and Caroline Ciavaldini travelled to South Africa to check out the trad climbing at Rocklands.

Rocklands = bouldering. But there's a new addition to this equation, as James Pearson and Caroline Ciavaldini have just returned from a recent trip from South Africa during which they ditched their crashpads and traded these for a full trad rack. After more than 20 days out there they came away with an astonishing result: not only a dozen or so new routes up to E8 but, importantly, the utter conviction that the potential for quality trad routes at Rocklands is quite simply enormous. A new mid-grade trad climbing heaven . We checked in to find out more.

Caroline, why ever trad in Rocklands?
The idea came after advice from Jacopo Larcher and Michele Caminati. We’d been trad climbing with each of them on separate occasions, so they had an idea of the sort of routes I enjoyed. They have both climbed extensively in Rocklands and so we trusted their judgement enough to make a trip, even despite a lot of negative feedback from other climbers

James, what did you expect? And what did you find?
I expected to put up routes on the larger boulders, or perhaps climb things that could potentially be high-balled were it not for a terrible landing. What we found was something quite different though. The routes we climbed were all on small cliffs between 15 and 35 meters high, and the potential for future development in this style is vast – perhaps 1,000’s of routes!

What is striking is not only the sheer potential but, looking at the photos, also the rock quality
The rock is top quality, some of the best out there. A bullet hard quartzite that forms interesting holds and features and is a true pleasure to climb upon. The rock on the majority of the routes was a little different to the boulders, being slightly smoother and less featured, apart from big horizontal breaks that just eat up gear. The climbing tends to offer big dynamic moves between good holds, and is generally very safe. If you are lucky, the upper section of the cliffs can be weathered a little more like the boulders, and the good horizontals might disappear. If all falls into place you get to climb a classic Rocklands style boulder problem right at the top of the route, but being pretty pumped from the steep climbing below. Pulling on perfect sculpted edges with a big run out below your feet – climbing doesn’t get much better than that! Oh yes, and to get back down you can just walk or scramble… rarely more than 5 minutes.

Tell us was your chosen style of ascent?
Our style of ascent changed depending on the route and the individual situation. We climbed some routes ground up, most we cleaned from an abseil line, and there was one I outright headpoint. Doing everything ground-up would have been a purer solution, but after stumbling upon a giant (spread hand sized) spider hiding in a jug, we got a little scared of putting our fingers in places we couldn’t see. My choice to headpoint the final route of the trip was simply down to the danger. I just couldn’t justify going for a hard dyno with ground-fall potential not knowing if the move was even possible. In the end it was a good call, as it took me around 15 tries to even catch the crux hold! As they often do, when I lead the route everything went well, so I’ll never know exactly how bad the fall would have been.

Caroline, what impressed you most?
We liked the tranquility and the silence. We were there quite early in the season so there were less people than usual, but by walking that little bit further and stepping off the beaten path, you feel like you have the place to yourself. A paradise only for you.

Best time of year? Any tips?
The standard season is June to early September, and for trad climbing I’d suggest (going at the beginning or end of this period, as July and August can be cold. The gear is really simple and for most routes you might get away with a single set of Friends. However to be sure I’d take a double set of Friends, especially the small sizes, as well as a set of nuts.

James, last question - will you be back?
Most definitely… with more time and perhaps a 4x4!