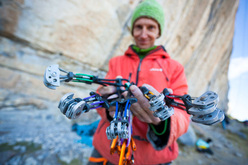 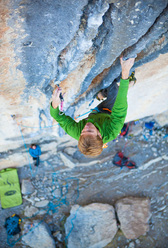 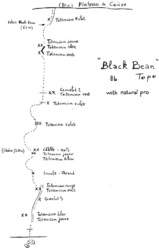 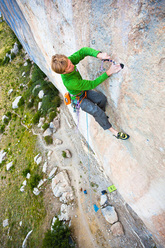 Interview with French climber Arnaud Petit after his greenpoint, ie trad ascent, of the 8b sport climb Black Bean at Ceuse in France.

100, 1000, 10000. 20, 40, 60, 80 thousand and counting... When we first published the news that Frenchman Arnaud Petit had sent the classic Black Bean at Ceuse, not as an 8b sport route but instead as a trad climb, the outstanding video that accompanied our report had been viewed just over a hundred times. In the weeks that followed it spread like wildfire across the vertical globe demonstrating that what the climber had achieved was not only to crown his personal dream, but also to capture the imagination of other climbers.
In truth this is unsurprising, because the ascent stems from one of the most famous and respected French climbers. After winning of the Difficulty World Cup in 1996 he progressed to the world's big walls, via Delicatessen in Corsica, Voie Petit on Grand Capucin, Salto Angel in Venezuela, Tough Enough in Madagascar, Walou Bass in Taghia, etc) and this ascent certainly has weight and credibility. At 40 years of age, 20 of which spent climbing at Ceuse, Arnaud now tells us about his Black Bean trad.


Arnaud, you said you felt on form...
I was able to climb 8c in a few attempts. That's not high compared to today's standards, but that's my form right now.

How long did it take you to prepare for the redpoint?
I climbed the route last year, this spring I spent 6 days on it. I carefully checked the best beta to make it as easy as possible.

How much harder was the trad version, physically and mentally?
The version on trad gear is harder, especially mentally; twice I walked up to the cliff and decided not to give it a go, because I didn't feel it. Physically you have to climb with the additional weight of the gear, so it's not like clipping draws! Then of course you have to place the gear, this requires energy, and the crux is harder because of the purple cam. Even if the hardest part of the crux is safe (if the purple cam pops, it's still a safe 20 m fall) the end of the crux section with the traverse right is mentally demanding, you need careful footwork and mustn't think too much about the consequences of a fall if the purple cam pops. Then, up the last 40 m, you have to stay totally focused.

Did you ever take any falls during your attempts? And how "dangerous" is the route?
I took only one short fall when trying to place my foot into the hole with the purple cam in the crux section. To say whether it's dangerous or not is really difficult, like in alpinism. It depends on each person and even the same person one day might say it's super dangerous and next express the opposite. My problem wasn't being physically capable of climbing the route, but being strong enough mentally to accept the short solo at the start and run it out in two sections, on the traverse and then on to the top, where it's better not to take a fall. I am definitively not a specialist of dangerous headpoints and there are certainly lots of climbs which are harder and more dangerous.

Did you ever consider removing the bolts, perhaps before or after the ascent?
No, I never considered this as Black Bean is a great sport route, established by Bruno Clément, really world-class and a true classic. Ceüse is a sport crag, the rock is not really suited to gear placements so there is no reason to remove the bolts. Even had I worked the route not using the bolts but instead by using a static fixed from above, I would not have had this idea. I am 40 now and I don't want to teach others how the things should be through this types of actions, even if I understand people removing bolts in some crack areas. As I see it, I am very very happy that we can climb this route playing two different games, without controversies.

Can you see yourself climbing other routes in this style in Ceuse?
In Ceüse the rock is not that featured for trad pro, so it's pretty scary, with solo sections on them. Furthermore, on limestone cams are not super safe and...the ground is never very far away. There are certainly a few good lines but in truth Black Bean is unique, with its long overhang, just enough gear... I was very lucky! That's why for me this ascent is magical and worth doing despite the bolts. Over on the Grande Face, this summer Sylvain Millet and Thibault Saubusse made the first ascent of a 4 pitch route with only a couple of bolts and an 8a pitch that look impressive. I haven't been yet...

What about more trad elsewhere?
Finding real trad routes, attempting them ground-up would be incredible. As I said though, I like it a lot but I am not a specialist. I like the fact that protecting yourself is a part of the difficulty, I have a lot of admiration for the English spirit, but I don't feel strong enough to make hard stuff on this. There are plenty of young, talented guys out there and personally I'm very happy with my Black Bean!

The video finished with your personal reflection, that maybe futile games are the best ones to play...
Showing this film makes people think about other ways of doing things. It's important to realise that the grade is not everything. Instead, the way you do things can be important. Especially for yourself.