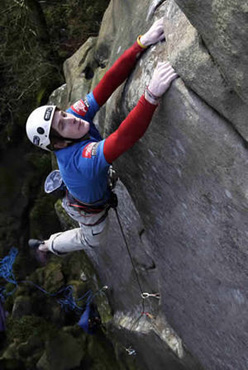 James Pearson climbs The Groove E10 7b at Cratcliffe Tor

James Pearson from Great Britain made the most of crisp winter conditions on 02/02/2008 to carry out the first ascent of The Groove E10 7b at the gritstone Cratcliffe Tor, Peak District.

An old project at Cratcliffe Tor often described as one of the last great problems on gritstone has been climbed by James Pearson. The 21 year old had dabbled with the rounded groove for four years prior to his successful lead on Saturday in perfect crisp winter conditions. This is without a doubt a significant first ascent for British gritstone.

Dave Brown, who witnessed the ascent, stated "The climbing is highly technical, hence the 7b (British, not French) tech grade, and it is also bold. A fall from the last move of the crux would test the reaction time of the belayer; only an instant sprint might save the climber from hitting the ground - possibly."

Pearson has been slowly but surely been making a mark in the UK climbing scene, with his 2005 repeat of Britain’s first E10, Neil Bentley's "Equilibrium" E10 7a at Burbage South, and his January 2007 first ascent of The "Promise", an 8m arête at Burbage North which he graded E10 7a.

On the bouldering front the young Englishman astounded all with the world's first ever flash of a confirmed F8b, Ganymede Takeover at Brione in March 2007. A month later he repeated this performance on The Great Shark Hunt at Chironico, while in December he climbed and Schule des Lebens in Switzerland's Ticino in the same style.

Pearson wrote an extensive report on his blog which offers excellent insight into the mindgame of headpointing. He concludes stating "The Groove is probably the most aesthetic piece of rock I have ever seen and is something I have gazed up at for almost as long as I have been climbing.  This fantastic feature has been tried by many of the leading climbers of their day over the last 20 odd years with most declaring it impossible or one for the next generation.  It has been a fairly major part of my life since first trying it over 4 years ago and I feel it has been a real journey.  As I have improved, it has been interesting to watch how my style on the route has changed and evolved from a series of uncomfortable slaps to a flowing sequence. I feel both proud and privileged to have been able to climb such an outstanding route."

Interestingly, he opted against placing a bouldering mat which would have rendered the landing slightly safer - an important ethical statement on a route which accepts no compromises.