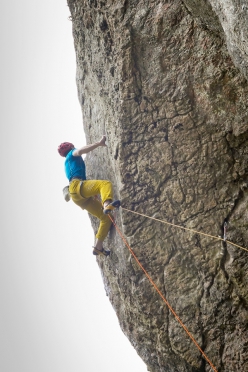 Dave MacLeod making the first ascent of Mind Riot at Binnein Shuas in Scotland. Graded E10 7a, it stands as one of the most difficult trad climbs in the country.
Photo by Ed Nind

Scottish rock climber Dave MacLeod has made the first ascent of Mind Riot at Binnein Shuas in Scotland. Graded E10 7a, it stands as one of the most difficult trad climbs in the country.

11 years after the first ascent of Echo Wall on Ben Nevis, one of the most difficult trad climbs in Great Britain and to this day unrepeated, Dave MacLeod has struck again with the first ascent of his long-term trad project up on Binnein Shuas in Scotland.

Prior to his successful ascent MacLeod had managed to climb the route on toprope a couple of times, but the powerful nature of the climbing and the possibility of hitting the slab from the poorly protected crux made this one of the most risky enterprises MacLeod has done for a long time.

Despite anything but ideal conditions MacLeod went for the lead and, somewhat surprisingly, made a long but safe fall at the start of the hard climbing. Rain then appeared to dash all hopes of another attempt but the strong winds then dried the route sufficiently. He regained his mindset and then went for the lead, sticking the crux sequence and then powering up through the final roof, past fairly well-protected 8a+ climbing in its own right.

The route has been calle Mind Riot and graded E10 7a. After his ascent MacLeod stated: "Overall I’d say the route is almost as hard as I’ve climbed on trad. It was a long time ago but probably only Echo Wall is harder, since it is more serious again with poorer protection. In some ways, this route is more similar to Rhapsody - both in the region of 8c to top-rope. But this one has ground fall potential from a couple of moves at the end of the crux, and is in a mountain situation rather than an accessible roadside crag."

18.06.2019
Dave MacLeod coasts along The Golden Road in Scotland
Scottish rock climber Dave MacLeod has made the first ascent of The Golden Road. Located at  Creag Mo on the Isle of Harris, Outer Hebrides, this trad climb checks in at E9.

09.05.2007
Dave MacLeod Metalcore 8c+ first ascent
On 02/05 Dave Macleod made the first ascent of Metalcore F8c+ at The Anvil, Scotland. This is now the hardest sports route in the country.
12.04.2006
Dave MacLeod frees Rhapsody E11 7a at Dumbarton Rock in Scotland
Scottish Dave MacLeod has climbed the direct finish to Requiem at Dumbarton Rock, Scotland, calling the climb Rhapsody and grading the route E11 7a. This makes it a strong contender for one of the hardest trad pitches in the world.