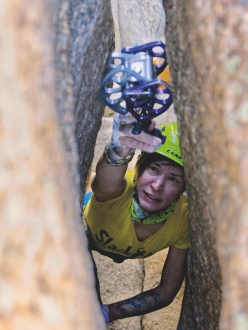 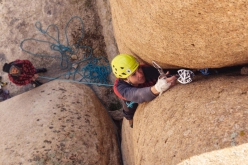 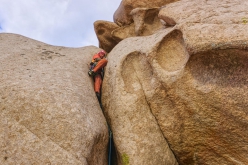 Kirill Belotserkovskiy introduces the rock climbing at Bekatau-Ata, a fascinating system of granite cliffs 70 kilometers to the north of Balkhash in Central Kazakhstan

At the end of September 2020 Olga Belotserkovskaya, Valera Alekseev, Zhora Berezikov, Pavel Gryaznov, Camille London and I made a trip to a place called Bektau-Ata in Central Kazakhstan. It's a granite massif 70km to the north of Lake Balkhash, one of the largest lakes in Asia. Dozens and dozens of grotesque-shaped boulders are located here, spread across 170 square kilometers and first climbed in 2009 by Dmitri Salnikov and friends from Tomsk. Since then, only one other big party from Russia visited the area. Also, at least once a year, a fellow climber from Almaty - Valera Alexeyev - has come to Bektau to find, clean, and climb new boulders.

I don't like bouldering that much. I'm too weak and lazy to try the same five moves for a week. So my wife Olga and I brought ropes, cams, helmets, and lots of tape to climb the cracks. The area is not as impressive for crack climbing as it is for bouldering, but it certainly kept us busy all week and, truth be told, we climbed merely a fraction of possible routes. We climbed 18 routes (all but one were first ascents) from 5b to 7b, and there are at least 30 more.

What is it
Bektau-Ata is a large rock massif 70 kilometers to the north of Lake Balkhash. From the road, it looks like a volcano, but it isn't. It consists of rough weathered granite. Due to the constant winds, the rocks have rounded edges, pockets and all other sorts of other depressions. The amount of boulders is enormous. No one has counted them, but according to Valera Alexeyev - the most prolific climber here - at present there are more than a hundred problems. It seems that the only roped climb before our arrival was put up by climbers from Karaganda.

Where is it
Bekatau-Ata is located in central Kazakhstan in the south of Karaganda region. The closest cities are Balkhash (70 km) and Karaganda (300 km). The term "In the middle of nowhere" describes its location pretty well.

How to get there
The only viable option to get to the area is by car. Without one, your travel will be a mix of trains/buses and taxi/hitchhiking. If your good at this sort of things, you'll figure it out. By car, you’ll probably drive from Astana (500 km) or Almaty (700 km). The distances here are enormous, sorry. Bektau-Ata is marked on the maps, so let them guide you.

When to come
Spring and autumn is the best time of year. From April to May and from September to November the temperatures will let you climb and not fry (in summer) or freeze (in winter). Early and late in the season, be prepared for temperatures below freezing at night. Be aware of ticks throughout the entire year; mosquitos abound in spring.

Where to live
There are few basic guesthouses. They are open in summer and close when everyone’s gone. You'll need to check it in-situ. An alternative option is to camp; there is a lot of space for wild camping and although there is a creek somewhere in the area, we didn't find it. There is no drinking water except for wells in the village. In autumn 2020 the water in most wells was muddy; only one house had a well deep enough to reach good water. We recommend therefore that you bring water with you. If you run out, ask the locals; they are friendly and always willing to help. There are no shops nearby, buy all your provisions in a city. Mobile phone reception works well, but the closest hospital is 70 kilometers away at Balkhash. Try to stay safe.

Climbing
Before 2009 the only climbers in the area were mountaineers from Karaganda. They didn't leave any documented ascents, only three pitons and a nut. In 2009 Dima Salnikov, with friends from Tomsk (Russia), came to Bektau-Ata and climbed some boulders. Later, Valera Alexeyev led a party of Almaty climbers. They were followed by more climbers from Russia, Valera once again, etc.. But no one climbed those stunning cracks before us.

Bouldering
It’s hard to count the precise number of boulders from sit down starts to highballs. According to Valera, there are more than a hundred problems on dozens of boulders. Unfortunately, as yet there is no bouldering guidebook.

Trad
All climbs made here before last autumn were on boulders. Then we came, and the pushing and puffing began. All cracks have rounded edges. The bigger the crack, the smother the edges. Sizes start from flaring fingers to the full-body chimneys, with all widths - from solid hand jams to improbable overhanging hand stacks - in between. The rock quality is perfect, the protection is bomber.

The only bolt in the area was installed by Salnikov in 2009. Please, let this remain the only bolt here. Bektau-Ata is a rural place with no traces of climbers. Let it remain wild and adventurous.

During our week’s stay we climbed 18 routes, all but one were first ascents. The one climbed before our arrival, Zadniy Prokhod Praviy on Cherepaha, was climbed in the 80s by climbers from Karaganda.

Most of the sectors are spread out fairly far from each other, so I think you'll be climbing in one or two sectors each day.

The grades are approximate and given by (and for) people used to "normal" climbing on actual holds ;-) Folks who are used to crack climbing will perhaps find our grading too soft.

Mavzoleyniy (Sepultery)
Located near the small village in the center of the massif. There is a cemetery, hence the name. We camped in a meadow nearby, so all the routes were 5 minutes away from our tents.
Detskaya Panicheskaya (Children's Panic) 5c, 5m . Could be done sans rope as a layback boulder problem.
Kok Archa (Green Juniper) 6b, 10m.  Easy start and awkward squeeze between a face and a cornice.
Zhizn (Life) 6b, 15m . Hard stemming in the very beginning leads to a good crack.
Rozhdenie (Birth) 5b, 15m.  Easy, but fun climb thru the crack in the celling.

Cherepaha (Turtle)
This is a prominent feature on the ridge, opposite the west face of Bektau-Ata. At the weekends there are plenty of bystanders, as people from Balkhash come to the area. There are few challenging routes to be climbed on Cherepaha. We did the easiest ones.
Zadniy prohod praviy (Turtle's asshole right start)
P1 6a+ 15m Start to the right of the overhanging offwidth. The moderate crack will lead to the ledge with big rock spikes.
P2 6b 20m From the ledge traverse to the left via a horizontal, rounded crack. Don't forget to protect your second.  At the top of a finish groove we left a nut and a cord for the rappel. 35 meters to the ground.
Zadnia lapka cherepahi (Tortoise's hind leg) 6b, 5m . It's funny how 5 meters of a diagonal crack up less than a vertical rock can harm a 7c climbers' self-esteem. Highly recommended.
Archa proj.  As easy as it looks from the ground, as hard it is when you get to the overhanging lip with its crack.
Volny (Waves) 5b, 40m . Long easy route ideal to start with.
Grib sprava (Mushroom right start) 5b, 15m . Grib is easy to recognize from the tourist trail at bottom of the basin. To descend rappel simultaneously down the opposite sides of the mushroom's head.

Svechki (Candles)
Svechki hosts one of the most attractive cracks in the entire area. We called it Svechka (Candle) but didn't bother to try it as it seemed too hard for us. Instead, we climbed a crack in the right part of the sector.
Silovaya Yoga (Power Yoga), 7a 35m.  From the bottom, once again, it appeared like a walk in the park, in fact, it turned out to be a tricky 7a. We climbing this in two pitches, but it could be done in one. There is no place to build a belay on the top. The leader has to sit into a pit and belay from their harness.

Sphinx
Sphinx is the backside of the neighbouring sector Crocodile. Both could be visited at the same time. It’s hard to explain where they are, so take a look at the map. The walk from our campsite to the sector took around 40 minutes.
Kazkhsha Kures, 7a/b 15m . For the first 8 meters there is an offwidth that swallows two #5 and one #6 camalots. The crack then narrows and disappears, leaving you in a corner with a couple of pockets for cams. To get down, rappel from a big block on a ledge or climb a 3-meter step and walk down on foot.
Eki Muryn (Two Noses), 6a+ 15m . That's unusual: it's not as hard as it looks. Don't forget your #6 camalot.
Obr Proj.  Short flared crack
Dev, 6a 20m.  The sub-moderate route, but nevertheless, you'll have to breathe hard for a while.
Zheztyrnak, 6b+ 15m . Short but interesting. This ends on the same ledge as Kazakhsha Kures.

Crocodile
A few short and generally friendly routes are located here. This sector is good for learning and warming up.
Kosaya Vlevo (Left Diagonal), 6a 15m. In the upper part, a crack runs out, so you'll have to place a bomber #1 cam and run it out for a few meters up the finishing slab.
Nedruzhelyubnaya (Unfriendly), project . Flaring finger to narrow hands crack.
Druzhelyubnaya (Friendly), 5b 10m . 70-degree corner with a good crack inside.
Sheya Krokodila (Crocodile's Neck), 6a+ 10m . Short fist-sized crack.
Lapka Krokodila (Crocodile's paw), 6a 10m.  Classic, uncomfortably wide crack, where you can't get into. Good intro for offwidth climbing.

All the routes we climbed are located to the west of Bektau-Ata itself. There are plenty of cracks below the NW Ridge and the East Face.