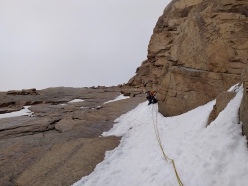 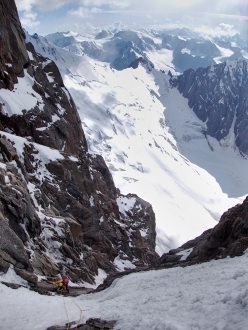 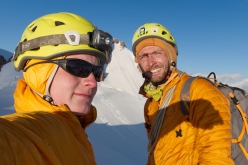 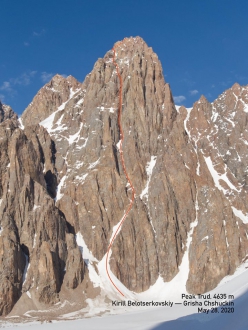 On May 28, together with Grisha Chsukin, I climbed a new route on the west face of peak Trud. We graded it 1200m WI5 M6 6b or Russian 5B. Trud located in Talgar massif in Almaty Natural Reserve. Which, in turn, located near to Almaty—the biggest city of Kazakhstan. At 4973m, Talgar is the biggest mountain in Ile (Zailiyskiy) Alatau range of Northern Tyan-Shan.

Long approaches, lack of information, bureaucracy, and a bit of corruption keep most of climbers away from the area. Nevertheless, I convinced Grisha to try the route once again. I had made a first attempt in 2015 together with Tursunali Aubakirov back in 2015. Back then, we ran out of steam and bailed half a pitch below less steep ground.

The 40km approach took two long days. We had to cross two mountain passes and two rivers. We pitched our tent on the moraine of the Kroshka glacier and took a day off to rest.

For the first 300 meters our route follows a snow gulley which crosses the lower part of the face. Approx in the middle of the gulley, we turned left towards the chimney system. And real climbing began. Two pitches were steep and straightforward ice-covered chimneys: thick ice inside and a thin layer of verglas on the walls. The third pitch started below the hollow ice column. I traversed across rotten ice below it, then started to climb up, but ran out of ice. The column was useless, as it wasn't attached to anything above. A series of tricky drytooling moves let me climb to safer ground. A few pitches fly by, and then I ound myself in a chimney, blocked by a chock of ice. I scratched the tips of the my tools into it, as hitting the feature was too scary. Grisha wisely jumared this pitch. The regular overhanging loose chimney brought us to my previous top point. Last time I had aided here off the pitons driven into the choss. This time I brought my climbing shoes. Stemming between the polished monolith on the one side and loose blocks on the other, I got to the single piton off which I had rappelled five years previously. After a few hard moves I reached easier ground.

The upper part of the face is less steep, so we accelerated. On the third roof pitch a piece of rock hit my eyebrow, broke my glasses, and made a right mess - blood on the face, blood on the snow. I placed a screw and descended to Grisha to try to put a bandage onto the wound. It declined to stick, so I kept climbing without it but had to shake off blood when this started to accumulate. After a few more pitches we got to the summit at 7:30 pm.

The descent took 5 hours. First, we scrambled down the ridge to the north, then we rappelled seven pitches off Abalakovs, then swam (and silently swore) through waist-deep snow on the SW ridge, and eventually walked down awful scree to reach the glacier. All in all, it took 23 hours from the tent to the tent. During the next two days, we reversed our way over the passes, glaciers, and rivers and embarked on our journey home.