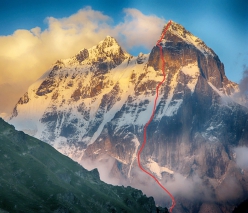 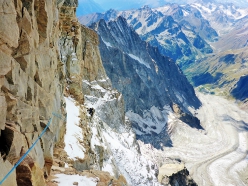 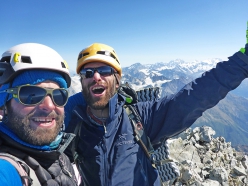 In September 2020 Georgian mountaineers made a 16-day trip to Svaneti in Central Caucasus and completed two new routes. The first, by Archil Badriashvili, Giorgi Tepnadze and Levan Lashkarashvili, up the SW Face of Ailama (4,547m), the second by Badriashvili and Tepnadze up the NW Face of Ushba. Badriashvili reports.

The first aim of our 16-day September expedition was Mt. Ailama, the highest peak of the Lower Svaneti, a very rarely visited, extremely beautiful region of the Caucasus. During the 1960-80s the SW Face of Mt. Ailama was popular among experienced mountaineers, since then though only a handful of ascents have been made. A long drive is followed by a short hike, at the end of which one is greeted by a 2000 meter face.

My mother had spent four summer seasons working as a doctor in the famous "Ailama" alpine training camp and I’d heard stories about it since my early childhood. I'd always wondered why a great peak like this one just stood there, untouched, for so many years. After closing the famous camp and the arsenic mines in the late 80’s, almost every trace of human beings has been washed away from the area.

For this long-awaited ascent, my climbing partner Giorgi Tepnadze and I asked Levan Lashkarashvili to join us. A friend of ours from a younger generation, he’s also a member of the Mountain Conditioning Program for young alpinists, run by Giorgi and myself for the United Federation of Georgian Mountain (UFGM) platform.

The ascent on Ailama was mostly on rock, the first half on very loose, although technically easier ground. Our new line started at about half-height, when all of a sudden the rock becomes relatively solid. The rock sections were led all free, while the seconds climbed most sections free, too, past predominantly grade V/V+ terrain. Falling rock on one of the loose IV pitches took away Levan’s nail and some skin around his little finger, but after some minimalistic first aid he performed amazingly well with nine fingers, too!

After sleeping above the last crux we started to simul-climb, where ice replaced rock… On that day, on September the 4th, we reached the summit in perfect weather and sat there for 1 ½ hours. A day and a half later brought us to a refreshing natural water pool at the bottom of the mountain.

The climb’s complexity is enriched by a hard descent. This is considered “problematic” due to objective dangers and the difficult route-finding from the NW ridge down to the SE slopes of the Ailama glacier, which is melting and where only wild mountain goats can really feel at home. Shortly after our return to base camp, we started our drive towards Mt. Ushba in Upper Svaneti.

After two days of heavy rain in the Becho valley we were ready to hit the trail again. Levan left Svaneti to climb something else, and this we were joined by Zurab (my father) and Gezi, a famous mountain guide. We, close friends, went to the base of the mountain on the 8th of September. Giorgi and myself were willing to try and fulfil our old dream: climb a new route on the Crown of the Caucasus, a unique mountain, famous for its beauty and harsh character.

The ascent started in the morning from 2,800m on September the 10th, with headlamps on as we climbed through a short but chopped glacier; then a long session of simul-climbing. After breaching the first band of rock we stopped at the best two-man bivy place around, at around 4000; it was midday and we had a direct look at the object of our desire - the central NW Face. It stood there, stunningly, there a golden hue at sunset.

Day two involved 9 pitches of fragile ice and mixed climbing, including sections of powerful, or maybe power-sapping, moves. Considering the rock quality I arranged a 5-point anchor) and stood there as my partner took the lead and ventured into the compact granite, vertical wall.

We spent two more days on a wall. With no portaledge and only a small amount of water, we had to fight for every meter. There’s just one single, tiny ledge on the entire wall, and that’s where we slept. This somewhat overhanging wall proved to be an intense experience. At midnight on the 14th September, after climbing for 22 hours non-stop, we completed the crux - frozen, tired but happy. The short 3-hour nap was followed by our wide grins in the morning.

Giorgi’s boots were so worn out that they refused to have crampons attach to them. Careful simul-climbing on mixed terrain brought us to the summit. Our joy was accompanied by a bright horizon and remarkable weather. Our family and friends down in base camp and in Tbilisi were happy, too, to hear the news.

The descent via the opposite SE face (1,700 Gabrieli route TD+ Caucasus 5A) took seven hours, plus the trek down through the Guli valley. After five days we reunited again with the others. As they weren’t asleep, there was no need to postpone celebrating with food and wine!