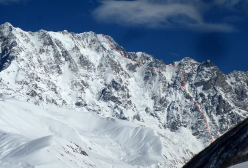 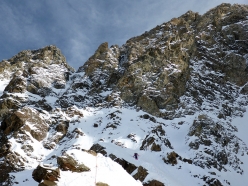 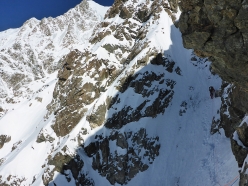 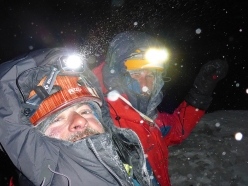 In February 2018 Georgian mountaineers Archil Badriashvili and Giorgi Tepnadze climbed alpine style for 8 days to establish a new route up Mt. Shkhara (5,203 m), Georgia. In doing so they also made the first winter ascent of the mountain’s 2300 m high South Face.

After claiming “the first Georgian route in Himalayas”, namely the first ascent of Larkya Main in autumn 2017, in February 2018 Archil Badriashvili and Giorgi Tepnadze completed a new route up the South Face of Mt. Shkhara describing their efforts as their “second biggest project ever. At 5203m this peak is highest mountain in Georgia and one of the highest mountains in the entire Caucasus, and Badriashvili and Tepnadze spent 8 days climbing alpine style via a 2500m line, past 60 pitches and difficulties up to 6B ED2; M5; WI5; 75-80˚. Badriashvili sent planetmountain.com the following report.


Shkhara is one of three highest mountains in the Caucasus and the highest in Georgia. This mountain has proved to be harsh, especially in winter and it is famous for the huge distance between its base and the summit: the maximum height difference is circa 2300 meters on the South Face. While Shkhara has been climbed in winter a few times via its Balkarian aspect, the Georgian side of the mountain had remained unclimbed. A few attempts had been made in the past, the last being ours in February 2016, together with Bakar Gelashvili. On the fifth day we had to abandon our expedition as we were still below the middle section of the route.

This year more snow fell in the Svaneti region, but nevertheless conditions allowed us to progress more rapidly. We were accompanied by our friends Temo Kurdiani and Mikheil Khorguani; they helped us approach the route before going back home. On our previous attempt we had climbed a line up the lefthand side of the face, this time we started up the Central Couloir, climbing 1000 meters in two days. We were then hit by bad weather and this continued almost every day, making the climb somewhat adventurous. Exiting the couloir proved similar to what life sometimes has in store: after an easy ride, things become difficult. It was the same here. On one day we waited for the snowstorm to clear. On the next day continuous technical terrain had to be climbed in blizzard conditions; we climbing from midday till the midnight, past small avalanches, up mixed terrain, and difficulties up to WI5 and M5. The ascent continued for three days across unclimbed, complex terrain until an altitude of circa 4600 meters, and on the 8th day we joined the central ridge (Gvalia route) and followed this past a small variation up a pyramid-shaped rock formation. After climbing the last pitch, the 60th, we finally reached Shkhara’s main summit at 20:40. In the dark, with winds gusting at 55km/h and temperatures down to -38ºC, but very happy!

That day had involved 15 pitches across ice and the rocky ridge, which we had simul-climbed. After rappelling off V threads we soon found it impossible to continue our descent. Due to the dark and bad weather our ascent line was invisible. At 5000 m we made a bivouac on a very tiny ledge, using what we had left - the tent's outer and a sleeping mat. We tied in to the rock and endured a long and cold night. We hardly slept, but nevertheless rested a little. The descent continued for another five days, through heavy snowfall and on technical terrain that involved some traverses and some small further ascents.

The route up was climbed in alpine style, and the descent pretty much followed the same line of ascent. 70m of rope was used as abseil slings, mostly on the V-threads; no other gear was left on the mountain, except for a crampon which fell off Giorgi's foot at 4750 m during his descent. The last three days were also interesting as we began to run out of food, gas and batteries. Nevertheless we pushed the borders of our imagination in terms of joking, singing and also food and fire. First we worked on 1-1.5 liter of per day in total, but then decreased this as the days went by. After reaching the base of the mountain in the evening, we discovered that our snowshoes and walking sticks had been ripped away by an huge avalanche, so the next 6 km was the last exam that had to be passed until the next morning.

In 2017 we had organised a small, independent expedition to the Himalayas, which culminated in a first ascent of Larkya Main 6,425 m, in one of the wild valleys near Manaslu. After this experience we somehow felt more self-confident after ready to attempt longest technical route of our lives, this time in the Caucasus. This climb took 13 days in total and lasted for over 60 pitches on the way up. The spirit of this expedition, accompanied by significant but temporary discomforts, remained on the "bright side" and we believe this helped us stay awake and alert throughout, enabling us to return home safely.