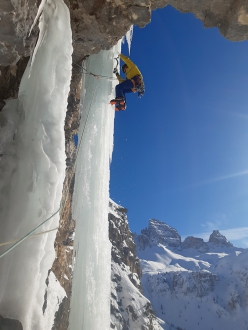 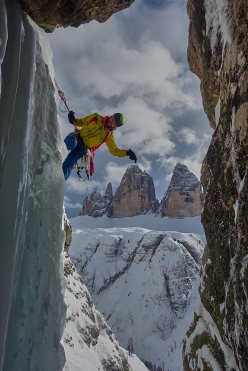 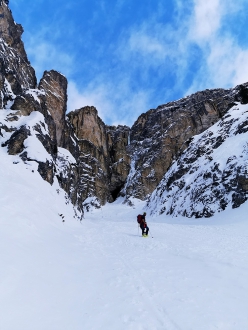 South Tyrolean mountain guides Manuel and Martin Baumgartner have established Eisradius and Last Minute, two new ice climbs in Rienztal (Höhlensteintal) with spectacular panorama onto the Tre Cime di Lavaredo described as 'probably one of the most beautiful views in the Dolomites.’

On 29/01 my cousin and I skinned up into Rienztal, a side valley of Höhlensteintal, to climb a beautiful five-pitch icefall. We encountered wonderful ice and moderate difficulties, it was simply brilliant ... we soon forgot about the relatively long approach and were rewarded with one of the most beautiful views of the Dolomites, with a breathtaking vista onto the Tre Cime di Lavaredo.

After having done our homework asking the most active climbers in the Sexten area it seems as if our was a first ascent, especially since the ice only forms in truly exceptional conditions. We’d kept our eye on it during the last four winters and Eisradius had never formed as much as now. The day after our ascent, it was repeated by local climbers who confirmed the difficulties and beauty.

On the day it was repeated we skinned back up into Rienztal for an hour and a half, this time with a much more ambitious goal in mind, namely an elegant dagger protected by a steep bastion. The drip gets a lot of sun, so much so that as we climbed it we didn't trust placing any ice screws. instead, we placed a peg, because the drip didn't seem stable enough. And when we abseiled down an hour later, we were amazed to see that the column had collapsed and no longer existed. Hence the name: Last Minute.