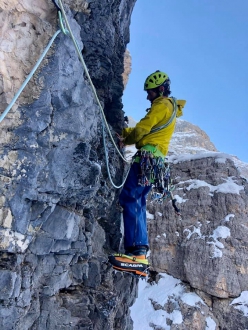 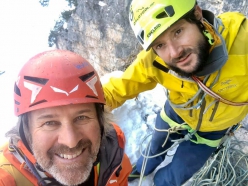 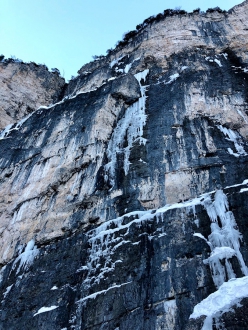 On 10/01/2019 Christoph Hainz and Manuel Baumgartner made the first ascent of Barba Bianca, a new mixed climb in Val Travenanzes, Dolomites.

Val Travenanzes in the Italian Dolomites has been busy this season. Just four days after the first ascent of La Churri at the hands of Beppe Ballico, Santiago Padros and Diego Toigo, this beautiful little valley close to Cortina d’Ampezzo witnessed another first ascent, this time by South Tyrolean mountain guides Christoph Hainz and Manuel Baumgartner.

Hainz told planetmountain.com "I’d ventured into the valley a few days earlier with a client and I saw that there was a lot of ice, and I also immediately noticed this beautiful line. I flicked through the guidebook but there was no mention of a route there, and I couldn’t find any mentions on the internet either, so I called my colleague Manuel and told him about the icefall. Maybe it was new, maybe it wasn’t. The only way we’d know would be to go and see for ourselves. We walked in to the valley last Friday and climbed the route as a four-pitch outing. The climbing on both the mixed terrain and the ice is very beautiful, but in order to make the second pitch slightly less demanding we added two pegs on our way down. We also came across an in-situ wire close to the start, and later learned that it was from a 2015 attempt by Vittorio Messini and Peter Ortner who had bailed down because the ice wasn’t in condition."

The new 120-meter route is called Barba Bianca, deals with difficulties up to M7+ and was repeated the following day by Santiago Padros, Iker Madoz and Dani Ascaso. As always, the snow conditions (above) need to be evaluated carefully.