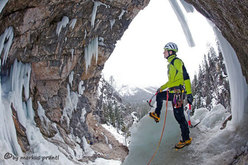 Pavol Rajcan at the start of Dolasilla (Fanes, Dolomites)
Photo by Markus Prantl 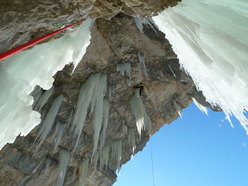 It's almost 50m long, overhangs 25m and is named after the legendary Fanes princess... we're talking about Dolasilla, the beautiful and difficult mixed route discovered and established by South Tyrolean alpinist Florian Riegler and subsequently freed by Pavol Rajcan.

Riegler explains that the route is located "Between Dobbiacco and Cortina, close to Val Travenazes, the valley famous for its ice climbs. I discovered this cave with a friend of mine and when we approached it for the first time I immediately noticed my dream line... a route which starts right in the middle of the cave: a 10m drip of ice is followed by an overhanging crack and this leads from one dagger to the next to reach the final drip of ice."

Love at first sight by the sounds of things. All Florian had to do was begin the climb, but the start of the adventure was delayed by "minor mishaps". "I had some difficulties in establishing the route" explained the climber from Bolzano "a bolt once broke on some chossy rock and I took a 10m tumble. Another time I planted my ace in a drip and it broke off and pulled me down. But finally, after some tiring hours bolting the overhang, I managed to place more than 20 bolts."

The time to free the route had come... "After some checking-out I knew that the challenge was feasible, but that it would also be extremely difficult. I set off to do "battle" dozens of times with different climbing partners, just like Dolasilla, the Fanes princess. Unfortunately though my ice axes weren't as infallible as her arrows..." Then, as in all fairy tales, the light: in mid-March Riegler managed to climb the route free. Even if it wasn't the first fee ascent, since Florian himself underlines: "My friend Pavol Rajcan managed to defeat Dolasilla in a mere three attempts, and in doing so he also managed to grab the first ascent: a great performance by this young climber from Slovak Republic!"