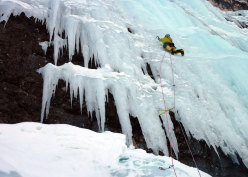 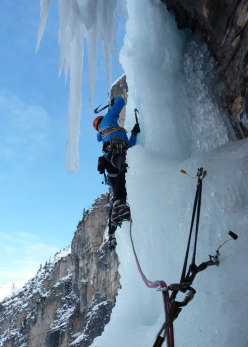 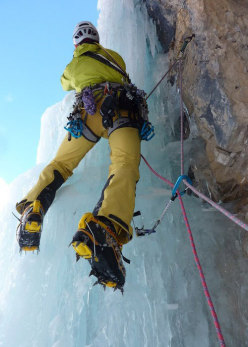 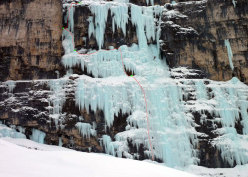 The route line of Attraverso Travenanzes
Photo by Beppe Ballico

On 16 February 2013 Beppe Ballico and Andrea Gamberini made the first ascent of Attraverso Travenanzes (120m, III, WI5+) a new icefall at the Supermario sector in Val Travenanzes which, once again, confirms itself as being an eldorado for ice climbing not only in the Dolomites but further afield, too. The report and route topo by the first ascentionists.

Attraverso Travenanzes by Beppe Ballico
My legs have carried me up into this beautiful valley for 13 winters and every time I come here it I breathe an air of solitude and tranquillity, in particular if this happens to be mid-week... I can safely say that it is here that I've experienced the most beautiful adventures, and by this I mean not only the ice climbs themselves but also the friendships. The winter of 2006 is unforgettable: as part of the "Alpine Ice Tour" four of us ascended into this valley, loaded like mules, to camp below the base of the falls. Laughter, stories, dreams... in short, all the right ingredients to make you happy.

It seems like only yesterday, but that was seven years ago and the desire remains to invent some new lines, rather than climb those icefalls which we've repeated endlessly. And so the other day, after climbing the fantastic "Pilone + Candela di Supermario" for the nth time I caught sight of a drip to the left. As far as I can remember it had never formed over the last ten years, or at least it had never been so big.

There was no time to climb it that day, and so back at home I got in touch with Andrea "Il gambero", my trusted climbing partner. The weather forecast was good and 5 days later we entered the valley; it was 7am, we were at the parking lot and there was already a team ahead of us... yeah, it was Saturday!

Afterwards we encountered 4 teams at the base of Pilone - which just goes to show how beautiful this route is - another team on "Sogno canadese" and another on "Belvedere"... marvellous! It was a real party in Val Travenanzes. But I though to myself: hmm, it's nice though to set off up a new route with no one above... today!

In the end we climbed a great outing below hanging daggers, a traverse and an amazing, demanding finish. This is the valley of wonders... Thanks Gambero…

How Attraverso Travenanzes came into being by Andrea Gamberini
A missing line, one which we'd often spoken about and which occasionally tickled our, sometimes uncontrollable, winter fancy. Every winter we visited the valley to climb other beautiful icefalls, waiting for the right moment when the missing piece would appear.

But let's rewind to a month ago, when I headed up with Raffa and David. Beppe and Nicola had been there a few days beforehand and all of us, before starting to climb, had looked upwards to admire the changing ice and realised that the time had come. The final drip had touched down and although from below it didn't seem all too big, it was certainly worth a go! A few of days of light snowfall were followed by some good weather and we all agreed on a day. Safe in the knowledge that we were about to climb in a place we loved and knew like the back of our hands, we set off with a strange, childish joy, fuelled by the unusual idea of climbing something which, in all likelihood, had never been climbed before.

I started up the first pitch and after a slender drip, while climbing the upper wall, I already began to think of a name for the route. I placed a peg, clipped the ropes, rested, freed my mind and looked around. To our right lay the famous "Pilone Centrale", but we were heading up the centre of sheet of ice, straight towards a niche.

From there we decided to continue diagonally left, crossing "Trans-Travenanzers" (the legendary route established by Ezio Marlier and Massimo Farina in 2005) and continue on left for a few more metres to reach a beautiful pillar of blue ice. This in turn led to the base of a corner, where the finishing drip steepened and exited onto the upper ledge. The result were four beautiful pitches, the second of which is a traverse, hence the name. We were undecided about whether to call it Incrociando Travenanzes - Crossing Travenanzes - but then opted for the more meaningful Attraverso Travenanzes - Through Travenanzes. Being able to give a route a name is priceless!

The route finishes on the snowy ledge. It was a sunny Saturday in mid-February, ice conditions were excellent, temperatures were pleasant and the snow was safe. Superb! Numerous other parties were climbing other lines in the valley, confirming once again that this winter has created some superb pearls in the Dolomites.

Thanks to Beppe, my climbing partner on this and other formidable routes, thanks also to Raffa and Franz with whom we shared two great, innovative days in Val Travenanzes.