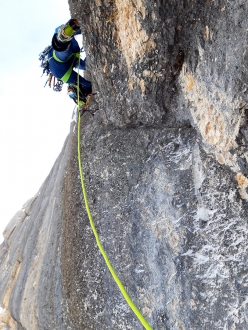 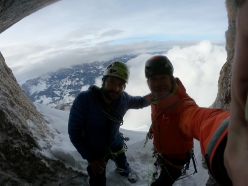 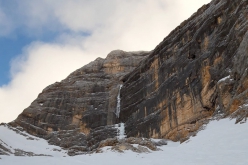 On Sass de la Crusc / Heiligkreuzkofel in the Dolomites, the South Tyrolean mountaineers Simon Messner and Manuel Baumgartner have made the first ascent of Rapunzel, a new ice and mixed climb graded WI6+ M7+.

The imposing Sass de la Crusc / Heiligkreuzkofel bastion regally dominates the Val Badia valley in the Italian Dolomites. Important chapters of mountaineering history have been written on the mountain's immense west face, first and foremost the Mittelpfeiler with its infamous "Messner slab", first ascend by Reinhold Messner and his brother Günther in July 1968. The very same mountain now hosts a difficult winter route established by one of the sons of the "King of the eight-thousanders", Simon Messner, together with mountain guide Manuel Baumgartner. The new route ascends an ephemeral line of ice located on the left side of the face between the main summit, Sasso Cavallo, and Cima Dieci. The first two pitches had been attempted by Baumgartner with his cousin Martin in winter 2018, but due to poor conditions they had been forced to retreat. On 18 December Messner and Baumgartner managed to add the remaining two more pitches to complete the line now called Rapunzel, and it is not surprising that their route reflects the rigid first ascent ethics of almost all other climbs on this peak. It’s worth noting that in the past Simon Messner had established several summer climbs on the west face, such as Sisyphos, a direct variant to Mittelpfeiler and D'l Zübr Interrail. Interestingly, despite being steeped in history, Rapunzel could well be the first mixed climb on Sass de la Crusc.


The west face of Heiligkreuzkofel in South Tyrol’s Val Badia is a special rock. Not only because this "stone wall" offers incredibly beautiful alpine outings, but also because the peak holds an important place in the history of mountaineering. The face in fact is particularly famous among all those who practice honest alpinism.

Heiligkreuzkofel has always exerted a particular draw on both Manuel and myself, also because of this rich history. Ever since Georges Livanos - nicknamed "The Greek" - forged his impressive route in 1953 straight through the "Ciaval" (the horse, as the local Ladins call the mountain’s main summit), more and more climbs have been added to the mountain. Big names such as Livanos, Sepp Mayerl, Albert Precht, Reinhard Schiestl, Helmut Gargitter, Christoph Hainz, Hansjörg Auer... they have all left their mark here. The 1968 Mittelpfeiler route with its notorious "Messner slab", first ascended by my father and his brother Günther, must also be mentioned. Back then, this short, smooth passage was graded VI+, nowadays in most climbing guidebooks it warrants VII+ or even VIII. First ascended in stiff boots, at the time it was quite simply a masterpiece. It’s surprising and also great that up to this day the mountain has remained (almost) bolt-free. The west face of Heiligkreuzkofel is still a "place of extremes", indeed plaisir climbing is a completely different ballgame. For all these reasons Heiligkreuzkofel is - at least for me - one of the greatest mountains in the Dolomites. So let’s leave this face as it is: a place for alpinists and (almost) completely without bolts… the next generation will thank us!

"What an amazing line of ice!" I often thought to myself as I drove through wintry Val Badia. And then I kept telling myself to be realistic: "surely the route has already been climbing before, definitely" before continuing my journey.

Then in December 2019 I received a call from Manuel: "Simon, if you manage to get off from work tomorrow, we’ll go and check out Heiligkreuzkofel." Of course I immediately knew what he had in mind and, although I was feeling poorly, I said yes.

At dawn on 18 December 2019 we skinned up to the Heiligkreuz hospice with our heavy packs, followed path 15B below the face until we reached the obvious ramp and stashed our skis there. The weather wasn’t good in the rest of South Tyrol, it even rained in some places, but here in Val Badia we were lucky. Although it was foggy, it didn’t rain. We took turns beating the trail to the start of the route, crossing easy but avalanche-prone terrain. Manuel had already tried the line at the end of November 2018 with his cousin Martin Baumgartner and back then they’d managed to climb the first two pitches of ice before retreating. The first two pitches were mine therefore (and admittedly I was happy with this), while Manuel would tackle the middle section, i.e. the crux, of the route.

Manuel seconded me quickly and after a short "enforced break" because he’d lost feeling in his his fingers immediately took the lead. He made a long reach away from the ledge and only just managed to find a good hook placement with his ice axe, then he briefly looked at me as I smiled and concentrated, and set off upwards. A little higher he managed to place a good peg while hanging off his axes, then he placed a small Camalot in the good lower hook placement. He continued, placed a wire (which we left in-situ) and reached a slender dagger which shattered on impact. Manuel rested here again, placed a bad Camalot and then a good peg a bit higher up, before following very thin ice (WI6+) in one go all the way to the belay. I seconded this pitch without falling and confirmed the grade of M7+ or M8 (due to its alpine nature). I can particularly remember a really long and wobbly move in the middle of this pitch. Almost 30 meters of mid-grade ice (WI5) followed and led to the obvious niche and the end of the route. What a climb!

When we first looked at the niche, both Manuel and I thought that we’d easily place one (better still, two) solid pegs. But we were wrong! As much as we searched around, we only found one nut placement and a thread. Maybe those who repeat the route in the future will be more lucky and will manage to give Rapunzel a decent, last belay.

Since we’d only taken a 60-meter rope to save weight we abseiled down the route, driving in our pegs even more and adding a decent peg to the crux. We then trudged down to our skis and skied back to the valley station where we’d parked one of our cars. All's well that ends well.