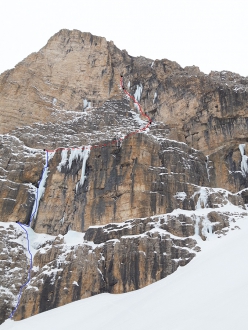 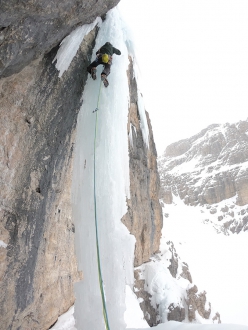 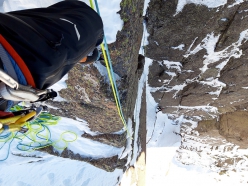 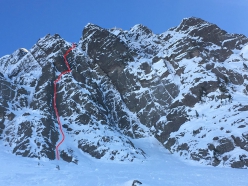 In winter 2017 Simon Messner and Kurt Brugger repeated the famous Steinkötter rock climb, adding some winter variations as they ascended Sarner Scharte above Sarntal, the small valley on the outskirts of Bozen in Northern Italy. At the time there was little ice and plenty of fresh snow, rendering the ascent "an interesting feat."

Nevertheless the two noticed the potential for modern mixed climbing and vowed to return to the porphyry peak. On 4 December this year they returned to ascend a line up the central section of the wall. After clipping three bolts of an existing summer route, Simon Messner traversed rightwards to follow an obvious line of corners before reaching the summit. The new combination is a "logical winter line" that avoids the slabs tackled in summer and includes a "rather delicate" traverse that is protected with trad gear.

A week later, on 12 December to be precise, Messner and Martin Sieberer ventured into Val Lasties to repeat the highly popular Solo per un altro Hashtag, established in 2018 by Jörg Niedermayr and Friedl Brancalion and in the news recently due to a repeat by Santiago Padrós and Diego Toigo who managed to climb the first drip.

Given the amount of ice on the obvious leftwards trending line at the top of the climb, Messner and Sieberer decided to add a further three more pitches to create Hashtag Extension (M6, WI5). The three pitches were climbed without adding bolts, so there is no insitu belays. The first repeat of this extension was carried out on the very same day by Babsi Vigl and Jan Czernetzki. This is now a a "very rewarding outing", but Messner warns that from the penultimate belay, with two 60-meter ropes you DO NOT reach the wide ledge and you consequently have to downclimb for about 5 meters. Alternatively, you can abseil off an Abalakov anchor.