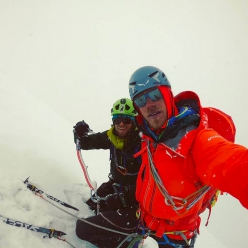 Simon Messner and Martin Sieberer on the summit of Black Tooth, Karakorum on 26/07/2019
Photo by Simon Messner 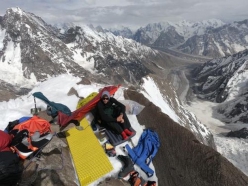 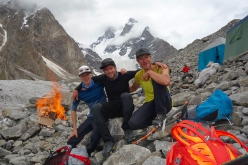 Philipp Brugger, Martin Sieberer and Simon Messner at BC after having made the first ascent of Black Tooth, Karakorum, 07/2019
Photo by archive Simon Messner 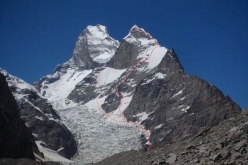 Details of the first ascent of Black Tooth, the 6718m mountain next to Muztagh Tower in the Karakorum, Pakistan, carried out by Simon Messner and Martin Sieberer on 26 July 2019.

As previously reported, on 26 July 2019 28-year-old Simon Messner from the South Tyrol and 31-year-old Martin Sieberer from Austria completed the first ascent of Black Tooth, the 6718m peak immediately next to the striking Muztagh Tower in Baltoro region of Pakistan’s Karakorum.

The duo reached the Younghusband Glacier along with the third member of their small expedition, 27-year-old Philipp Brugger from Austria, at the start of July. An initial acclimatization trip and reccie to 5200m illustrated that the planned line of ascent - the long rock and ice ridge leading from east to west attempted by German climbers in 2016 - would be too dangerous. The trio therefore opted for a line up the SSW Face, and reached this by following the approach through the glacier used by the French in 1956 during the second ascent of Muztagh Tower. After installing a fixed rope on 20m of steep black ice (WI5+) they descended to BC to recuperate.

Despite not being sufficiently acclimatised, they decided to make use of the forecast good weather and made a first attempt on 21 July. Thin ice and wet, soft snow made progress difficult and at midday they decided to bivouac, intent on proceeding when it got colder, but since in temperatures didn’t drop sufficiently they retreated.

Back at Base Camp they checked the forecast and realised that the weather would remain stable and overcast for the next four days and so, with time beginning to run out, they decided to give it one last attempt. Brugger did not feel sufficiently acclimatised and therefore remained in Base Camp and, after just one day of rest, Messner and Sieberer set off early on 24 July. Things initially did not go according to plan - their cook had failed to wake up and they breakfasted on Snickers bar and Coca Cola, before Sieberer broke through the ice and fell into a pool of frozen water while crossing the glacier - but nevertheless they reached their previous bivy at 8am. Exhausted after this 1200m ascent they decided to stay put, and the next morning they set off at 4.20am, simul-climbing to save time. As dawn broke they reached the upper snowfield which proved far steeper than expected.

Messner recounts "Martin was climbing ahead when we became aware of the steepness of it for the first time. Damn, it was steeper than expected! There was no time to lose, so we kept on climbing simultaneously for about 250 m of 55-60° steep ice. The hard and splintered ice was covered with a very unstable layer of something I would neither call ice nor snow... climbing felt extremely insecure! At some point we were too tired to downclimb safely and to belay on the bad ice our three ice screws were definitely not enough. There was only one option left and that was the way up."

The duo reached the end of the ice field and the upper ridge at around 8:30a. Safe, but spent, hence they downclimed the ridge for about 60m to reach a narrow ledge, too small to pitch their tent but wide enough for the two of them to lie down and rest during the day.

They set off at 4:00am the following morning on their summit bid. They left all their bivi gear at the ledge, negotiated steep terrain and a rock tower (M5) and in snowfall and poor visibility pushed on upwards to reach the corniced summit at 13.00. In order to descend they now had too traverse the steep summit slopes which were covered in lose snow. They untied so as to avoid dragging the other person down in case of a fall, then they started abseiling.

After 6 rappels the fog lifted and they realised they were heading down the right way. They downclimbed where possible but fatigue began to take its toll. "We were getting slower and slower and didn’t have much gear left, just one one small piton on Martin’s harness. As the sun set, he drove the piton into some rock that jutted out of the snow and started to build a belay. I was too tired to check the placement and just clipped into the belay. The moment Martin started to rappel I felt a hard, abrupt pull on my harness. I stared into Martin’s perplexed, wide open eyes. The piton hadn’t held and as soon as Martin put his weight on the belay it came out - nearly taking us both down."

After this near miss they reached the base of the wall in the dark. They rested, melted some snow and drank for the first time in many hours, then forced their tired bodies down the glacier, somehow making it to BC at 3.00am. The weather stayed poor for the following days and the next morning they started their return home along the Baltoro Glacier.

This is Messner’s second success in the region this season. A few weeks earlier he had made the first ascent, solo, of Toshe III, a 6200m peak in Pakistan known locally as Geshot Peak.