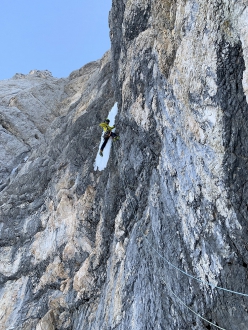 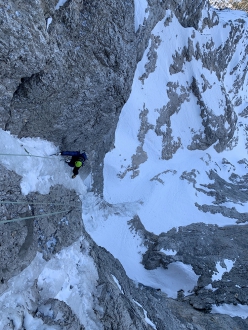 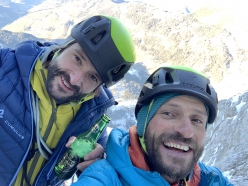 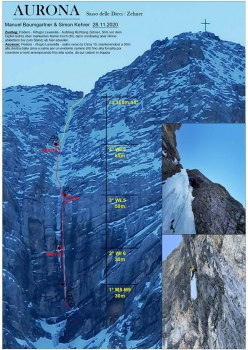 When I made the first attempt on Rapunzel on Sass de la Crusc with my cousin Martin in 2018, we noticed an impressive line of ice high up on the north face of Sass dles Diesc. The line rarely comes into condition but this year it formed again.

I talked about it with Simon Kehrer and he was immediately enthusiastic about the new project, for he too had noticed the drip several times in the past. Furthermore, he and Roberto Tasser had made a first ski descent down the same north face in 2014, during which they abseiled exactly down the line where the icefall formed this year.

For us it was obvious that this would actually be the simplest approach to the icefall. We started on 28 November 2020 at 7 am from Rifugio Lavarella and headed up towards Sas dle Diesc (Sasso delle Dieci).

Before reaching the summit we headed rightwards, up a beautiful chimney to reach the north-facing gully. From here we descended a hundred meters down the 45° gully and reached the first abseil station that Simon had set up in 2014. Three rappels deposited us at the base of the icefall.

Only here did we realise how steep the first pitch was. When we pulled the ropes, there was only one way out, and we had to succeed. I climbed the first M8-M9 pitch past some A0 aid sections, hanging off my ice axes to place the 4 pegs. The pitch can also be protected with small and medium-sized cams. After 30 meters I reached a good belay, protected with a cam and a good peg.

Simon climbed the second WI6 pitch and then stopped at the last belay we'd used for the abseils. The third WI5 pitch was pure pleasure and can be protected with cams to the left and right of the ice. After a short section WI3 ice the 4th pitch transforms into a snow gully. Simon reached a ice belay after about 50m. We then continued up the snow gully towards the ridge and then quickly reached the summit. Satisfied, we descended down the short via ferrata and reached the car in the last light of the day.