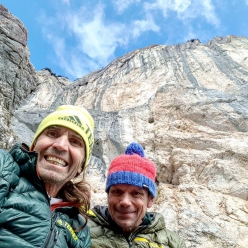 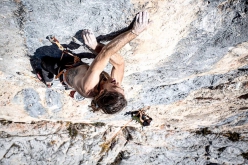 At the start of November 2019 German alpinist Thomas Huber frees his multi-pitch climb Stone Age (8b+) on Untersberg in Berchtesgaden Alps, Germany.

If you think about Thomas Huber and multi-pitch alpine climbs, the first route that springs to mind is his End Of Silence, the magnificent outing up Feuerhorn in the Berchtesgaden Alps freed in 1994 and famous - along with Silbergeier by Beat Kammerlander and Des Kaisers neue Kleider by Stafean Glowacz - for forming part of the Alpine Trilogy.

25 years after that landmark climb Huber has now completed another interesting multi-pitch outing in the same area but different massif, this time on the south face of Untersberg, namely Stone Age. Although Huber first noticed the line two decades ago while repeating the nearby Renoth climb with his brother Alexander, it wasn't until last year that he finally returned to the bolt line ground-up with his habitual climbing partner Michael Grassl.

Six pitches weave their way up through the beautiful grey streak and it was immediately obvious that the difficulties were by no means easy. In actual fact, the route has a sting in the tail with the last moves of the last pitch providing the crux of the entire outing.

After his Latok expedition with Simon Gietl and Yannick Boissenot in summer 2019 Huber worked hard to get back into shape. Knowing he was close he attempted it towards the end of October but this ground to a halt on the last moves of that last pitch. As luck had it, the German mountain guide managed the redpoint on a cool and crisp day in early November, just hours of days before the mountains were covered in a fine layer of snow.

Speaking to planetmountain.com, 53-year-old Huber said "I suggest the following: P1: 6a P2: 7c+ P3: 6b P4: 6b P5: 8a+/8b P6: 8b/8b+. Those who repeat the route will obviously confirm my grade suggestion, maybe it’s slightly easier because after my time in Pakistan I poured all my energy into just this one route and had no direct comparison with other climbs. What really counts though is the fact that Stone Age is an absolutely amazing line with mega cool moves. I couldn’t be happier."

11.05.2015
Cerro Torre, the Traverse and Thomas Huber's infinite dream
The video of the attempt carried out by Thomas Huber, Andi Schnarf and Tommy Aguilo to complete the Torre Traverse in Patagonia via the mountains Cerro Standhardt, Punta Herron, Torre Egger and Cerro Torre.