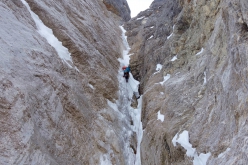 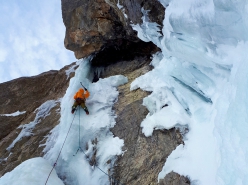 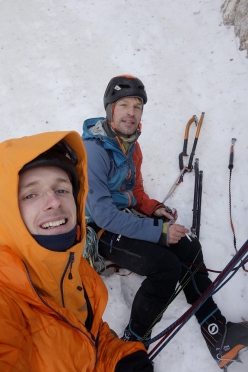 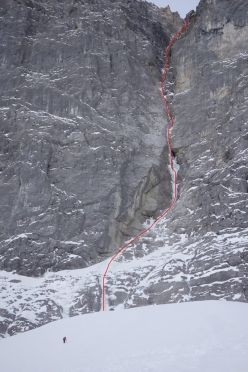 On 20 and 21 December 2020 German alpinists David Bruder and Martin Feistl made the first ascent of Stalingrad, a 1000m route between Grubenkarspitze (2663m) and Plattenspitze (2492m) in the Karwendel massif in Austria.

After starting the winter season in style with the first repeat and first free ascent of the David Lama & Peter Mühlberger creation Sagzahnverschneidung in the Valsertal in Austria, and following this up with the first ascent of 24 hours of freedom in the same alley, towards the end of December 2020 Martin Feistl and David Bruder completed what they have described as a "Kingline" in the Austrian part of the limestone Karwendel massif.

On 20 and 21 December the two German alpinists - who last season snagged an early repeat of Pandora on Mount Pordoi in the Italian Dolomites - climbed an extremely committing winter line up the distinctive couloir located between Grubenkarspitze (2663m) and Plattenspitze (2492m). Bruder had actually explored the line in April 2016 and made two unsuccessful attempts with Florian Huebschenberger in January and March 2018, while the 1000m gully was originally attempted by Franz Prechtold and Frank Weiser on 6 January 1992, but the duo was forced to retreat after a fall from pitch 5.

Bruder and Feistl started up the couloir shortly before 8:30am on 20 Deceber, simul-climbing the first two pitches up the ice smear before roping up. Despite the ice feeling more like hard-packed vertical snow, the duo continued upwards, with Feistl volunteering to lead the overhanging fifth pitch which at WI7, M6 would turn out to the route’s crux. "I have never been so completely absorbed in the moment on a 50-metre pitch, with the constant thought that this could and perhaps should be my last pitch of this sort” explained Feistl, adding “Without suicidal tendencies, one should not let go too often at this point."

From here the two continued upwards swinging leads, often past poor ice and hindered by spindrift, well into the darkness. Much to their dismay at 8:45 pm they realised they had not reached the end but instead were barred from continuing upwards by what looked like an insurmountable wall. Neither wanted to turn back though and Bruder, sensing Feistl’s reluctance to take the sharp end after having invested so much mental energy in the crux pitch earlier on that day, doggedly negotiated the route’s second crux. Just 20m high but “loose, scary and poorly protected WI6/M6", this required almost two hours of effort and the use of A1 aid. Galvanised by this unexpected success the alpinists breached the steep, final wall which, thankfully, provided surprisingly easy terrain to reach the notch in the summit ridge at 23:30 before abseiling down the line of ascent.

The new route has been called Stalingrad and is described as being a "harsh alpine classic".

24.11.2020
24 hours of freedom on Sagwand in Valsertal by Martin Feistl, Sven Brand
In mid-November 2020 Martin Feistl and Sven Brand in Valsertal, Austria, made the first ascent of 24 hours of freedom (300m, M6, WI 4, X) on the north face of Sagwand. This is a direct start to Rampenführe, the original line up the face, and shares a short section with the winter version of Schiefer Riss, climbed in 2013 by Hansjörg Auer, David Lama and Peter Ortner.