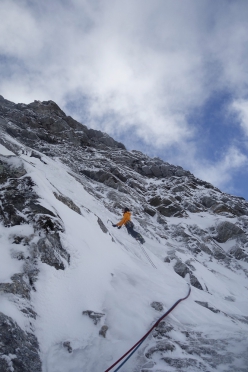 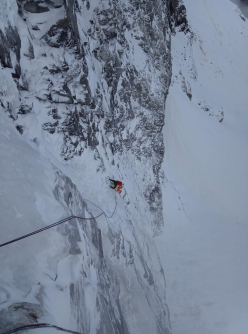 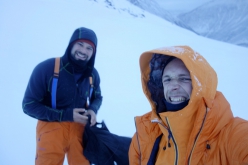 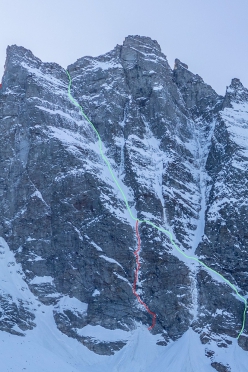 In mid-November 2020 Martin Feistl and Sven Brand in Valsertal, Austria, made the first ascent of 24 hours of freedom (300m, M6, WI 4, X) on the north face of Sagwand. This is a direct start to Rampenführe, the original line up the face, and shares a short section with the winter version of Schiefer Riss, climbed in 2013 by Hansjörg Auer, David Lama and Peter Ortner.

A few days after making the first repeat of David Lama’s and Peter Mühlberger’s Sagzahnverschneidung, Martin Feistl teamed up with Sven Brand and returned to the Valsertal to add an difficult direct start to the Rampenführe, the first route up the cold north face of Sagwand established in 1925 by Josef Harold and Helmut Scharfetter.

Feistl and Brand initially believed they were following the first two pitches of the winter version of Schiefer Riss, first climbed in March 2013 by Hansjörg Auer, David Lama e Peter Ortner with one bivouac, but later realised they shared only a brief section on the first snowfield before continuing directly up towards Rampenführe. The new variation is 300m high and breaches difficulties up to M6, WI 4, X. On joining Rampenführe Feistl and Brand pushed on to the summit, producing a total of 950m of climbing in 11 hours. It should be noted that another party retreated from an attempt a few days later, leaving pegs and nuts insitu used for the abseils.

24 hours of freedom: an allusion to the absurdity - at least for us mountaineers high up in the mountains - of the Corona entry regulations to Tyrol, against the background that our route took considerably longer than planned. We had to struggle with fresh snow, immense spin drifts, extreme cold with slightly frozen fingers and 3 pitches below the summit in falling darkness.   After our start at 4:00 in the morning, we were back at the car circa 24 hours later.

The line we climbed is the most direct and striking one there is this 20/21 season and it is a great honour to be the first to climb such a direct line on this legendary wall.   At the same time, I believe our ascent demonstrates the influence that the social media do not necessarily exert on serious routes and walls like this one: despite our reports and the many other publications of the legendary Sagzahnverschneidung just before the weekend, this Kingline was not attempted. More in general, hardly any parties made it over the normal Schrammacher Diagonale.

I was sure this obvious line would be climbed pretty soon after our repeat of Sagzahnverschneidung and that’s also the reason why we tried it now, in spite of the bad weather conditions. While I’m sure other teams might be much faster in even better conditions, for us what remains is an immense adventure, just as Sagzahnverschneidung was for David Lama, Hansjörg Auer and Peter Ortner. All in all, the entire experience under all the adverse conditions outweighs the difficulties and hardship we encountered en route.