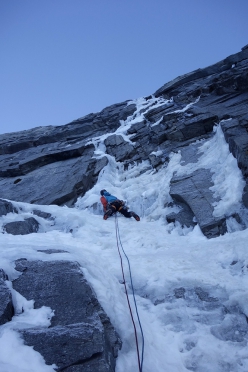 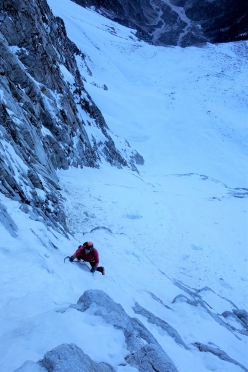 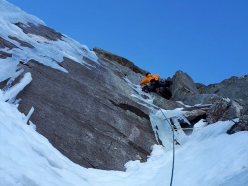 Martin Feistl making the first repeat of Sagzahnverschneidung in the Valsertal, Austria with David Bruder on 07/11/2020. The route was established in 2018 by David Lama and Peter Mühlberger.
Photo by Martin Feistl, David Bruder

On 11 November 2020 Martin Feistl and David Bruder made the first repeat and first free ascent of Sagzahnverschneidung, the difficult mixed route in the Valsertal in Austria established in 2018 by David Lama and Peter Mühlberger.

The Valsertal close in Innsbruck in Austria was described in no uncertain terms by the late David Lama as “a fantastic winter playground” and it is here that he honed his craft on routes such Badlands (2012), Schiefer Riss and Sagwand Mittelpfeiler (2013), Nordverschneidung on Hohe Kirche (2013), Nord Pfeiler on Hohe Kirche (2018) and, earlier that year, Sagzahn-Verschneidung. This obvious corner separates Mt. Schrammacher from Sagwand and was breached after four attempts in February 2018 by Lama and Peter Mühlburger, who graded their 800m mixed outing M6/A2.

In the ensuing winters the line had been attempted unsuccessfully by other parties, adding to its formidable reputation, but on 11 November 2020 Martin Feistl and David Bruder kicked off the winter 2020/21 season in style with the first repeat and first free ascent, having encountered prime conditions and difficulties up to M6, WI 4.

Writing by email to planetmountain.com, Feistl explained "It almost felt like a sacrilege to start our season on a route David had tried four times, but after receiving a photo of the face from a friend, we couldn’t believe how much it had come into condition. The climbing reminded us of Pandora on Sass Pordoi in the Dolomites which we repeated and freed last winter, only shorter and less demanding. After 4 fairly long pitches on relatively detached ice but excellent gear on the rock and perfectly equipped belays, we simul-climbed another pitch and then continued without the ropes to the summit. Just as Lama thought he had underestimated the wall at first, in these conditions we had overestimated the line. Fortunately we encountered neither the brittle rock nor any wild techno climbing that Lama had had to deal with."

The 24-year-old student concluded "Finding a line like this one in such perfect conditions, being there with precisely the right climbing partner, at the right time and with the right fitness, that's what makes alpine ice climbing so special. It’s not something you can just push the button and consume at will."