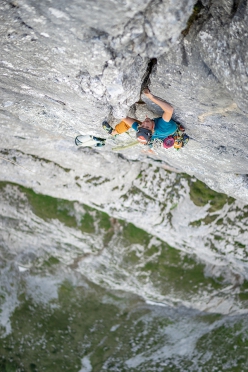 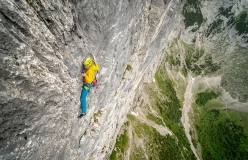 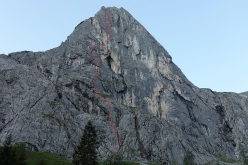 Martin Feistl has completed the first ascent, rope solo and ground-up, of Flugmeilengenerator up Schwarze Wand in the Wetterstein massif in Germany

Feistl began establishing the route on his own in 2015 aged only 17 and at the time forged the first five pitches. He returned in 2019 to the mountain’s north face and after a total of 6 days of work reached the top of his 13 pitch project.

The new, completely independent line has been called Flugmeilengenerator, flight mile generator, and boasts a mere 22 bolts in circa 500m of climbing. Although with difficulties up to 7a it is technically the easiest route to the summit, it nevertheless requires "a lot of confidence in the gear and courage in climbing some runouts otherwise you will gain really fast some flight miles." After the first ascent, Feistl carried out first free ascent with Janina Reichstein.