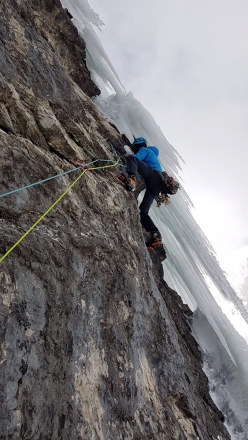 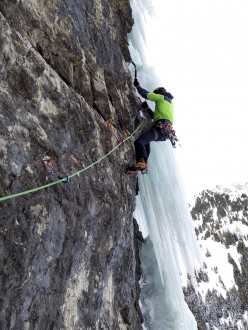 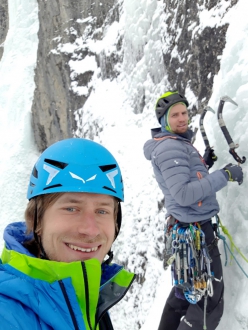 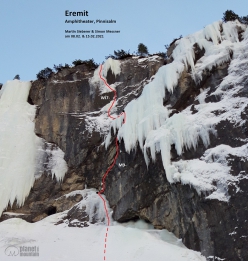 In Pinnistal, a small side valley of the Stubaital in Austria, Simon Messner and Martin Sieberer have established Eremit, a difficult mixed climb protected with trad gear and pegs. Messner reports.

Pinnisalm in the Stubaital valley is one of Tyrol’s most famous ice climbing areas. Most of the lines such as Männer ohne Nerven, Land im Strome, Vorhang, Himmelsleiter, Metamorphose, Magier, Comet, Kerze and Rumpelkammer were first ascended by none other than Andi Orgler and his climbing partners in the ‘80s and early ‘90s. All these routes have retained their aura to this day, mainly because they were protected (if at all) with normal pegs and have therefore remained "adventurous". We share these ethics that serve as indicators for our own climbing.

On 8 February 2021 Martin Sieberer and I broke trail through the freshly fallen snow up into the Pinnistal. Our plan: to try one of the last logical lines in the "Amphitheater" sector, to the right of Eiszeit and to the left of Himmelsleiter.

The first pitch follows an overhanging, extremely splintery crack rightwards until reaching ice. We managed to aid our way up this on our first attempt (A2-A3), but we didn’t contemplate climbing it free: too brittle and too poor pro! But we’d climbed the band of rock, now it was time to deal with the second pitch. Since it was very warm and the ice had suffered considerably, this pitch turned out to be somewhat nerve-racking. Martin climbed up over soft, poor quality ice until he reached a thin sliver - his only hope in order to continue upwards. But the sliver broke below the first blow of his ice axe. Martin was now confronted with a steep and smooth sheet of rock. Had this dashed our hopes of a first ascent?

No! ... Summing up all his courage and skill Martin climbed past the rock and (without any pro)pushed upwards to reach the ice (WI7-). The essential hook, which Martin had loaded with all his weight, disintegrated as I followed... somehow though I also managed to climb this pitch free (nice one Martin for leading this pitch!) Eremit, the "hermit", had been completed, now all that was left to do was free it.

Exactly one week later, on 15 February 2021, Martin and I returned to attempt the first free ascent. The thermometer in the car marked -13°C, not the best conditions to free such a steep (and brittle) mixed line. But as the saying goes, "if you don't give it a go, you’ll never know" ... so we set off.  After I had climbed the rock section again, partly with the use of aid, and after having left the essential pro in-situ, Martin made a first attempt. Both of us managed to climb this pitch free (M9, trad, loose rock) and the overall result is one of the last logical mixed lines in the Pinnistal. With the exception of two pegs and a pecker, you have to protect the entire route yourself with trad gear. (M9-, WI7-, R).

The first ascensionists would like the route to remain in its original condition (i.e. trad and without bolts!). The route was opened in this style and consequently it should stay like this.