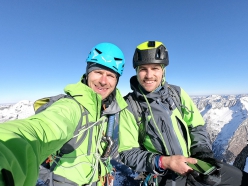 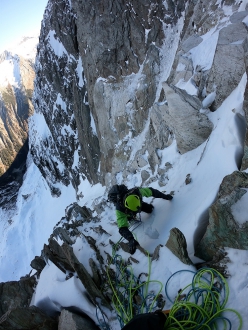 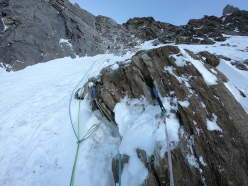 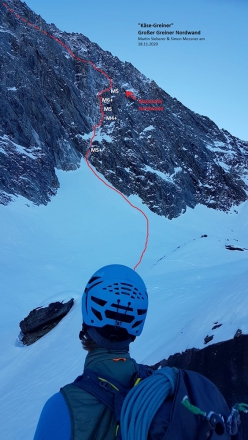 In November Simon Messner and Martin Sieberer established two new mixed routes on the north face of Großer Greiner in the Zillertal Alps. Großer Greiner (3201m) and it’s nearby little sister Kleine Greiner are rarely climbed and the mountains in summer are described as being "steep, loose and unpleasant."

Apart from the route established in 1885 by Wolf and Wechselberger, which does not climb the north face, but instead follows a diagonal gully from east to west, and the Nordpfeiler route, until this autumn there were no other climbs. According to initial research, the two new routes Käse-Greiner and Nordwandrampe are likely to be the first mixed climbs on this 500m face.

Finding the right conditions is no mean task, plus the mountain requires a long and complicated approach. Young Messner told planetmountain.com "there is certainly something adventurous about this north face: why fly to Patagonia when we have similar walls over here in the Alps?"

Due to the somewhat loose rock, ascents are recommended in autumn or spring. It may also be necessary to bivouac at the foot of the wall in order to have enough time for the ascent and subsequent descent.

THE CLIMBS
Käse-Greiner
(M6+), Simon Messner, Martin Sieberer 18/11/2020
This line is a modern and clean mixed climb. Especially in the first pitch it is essential that ice has formed (otherwise this become tricky and difficult to protect!). The route is relatively logical, but the pitches need protecting (the belays are only partially equipped - if at all).
Approach: see below.
Descent: abseil down the Nordwandrampe.
Gear: ice climbing rack, 1-2 short ice screws, a set of cams, nuts, pegs, slings (!)for a possible retreat.

Nordwandrampe D + (or WI3, M3, 70°max.) 24/11/2020
We only noticed this line when we had already climbed Käse-Greiner. We immediately realised that we had to return for this very logical line, and that's what we did. With the perfect conditions we encountered (ice, firn and powder snow only at the top) this line was easier than expected, so that climbed it team solo. In less good conditions, however, an set of cams, nuts, pegs and slings should be taken (also for a possible retreat). Without a layer of firn snow the steep steps could be tricky!