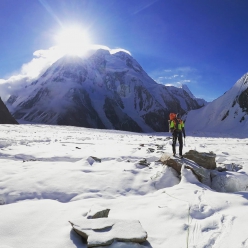 Simon Messner and Martin Sieberer with Broad Peak in the background before attempting Praqpa Ri in the Karakorum, August 2021
Photo by Simon Messner 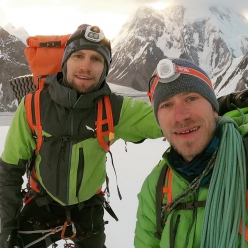 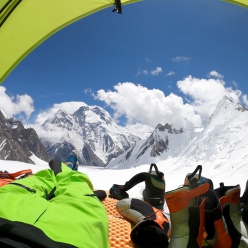 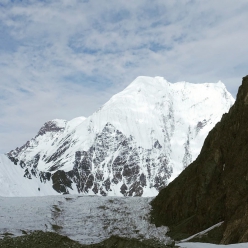 Simon Messner reports about his August 2021 attempt with Martin Sieberer to climb Praqpa Ri (7.134m) in the Karakorum, Pakistan.

In August 2021 Martin Sieberer and I attempted to climb Praqpa Ri, a 7,134m mountain to the west of Broad Peak and K2. When we reached K2 base camp at the start of August it was very warm. Too warm even, with temperatures well above 0°C at over 7,000m...

As soon as we set up base camp the big K2 expeditions left and from then on we were there all alone. The weather was unstable with a lot of humidity and sometimes high temperatures, resulting in a lot of fresh snow, in addition to the large amounts from the previous months.

A first exploration attempt at the west ridge ended quite soon because we simply sank into the soft snow. We then changed tactics and only walked / climbed at night, so that the snow could carry out weight at least in part. Nevertheless, we had to abandon our two attempts to reach the summit at 6,000m, because the somewhat steeper sections were impassable. We would have had to dig a tunnel to do this, as is usual in Patagonia - but this would have taken too much time!

As things turned out, we only had one really cloudless day, while for rest of the time we had monsoon-like weather: a lot of clouds, a lot of radiation and mostly fresh snow during the night. We then turned our attention to the east ridge and tried this twice - unsuccessfully once again. The mountain's north face would be very beautiful and technically demanding, but unfortunately extremely dangerous because of the many seracs.

On our return trip we two flights were cancelled, probably because of Covid and the Afghanistan crisis, which began exactly when we left the Baltoro glacier and headed to Skardu. It's terrible what's happening in Afghanistan!

We are not certain if we will return to Praqpa Ri again. It is likely we won't, but we have seen another, very interesting mountain that we may try in two years time.