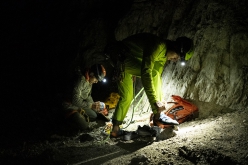 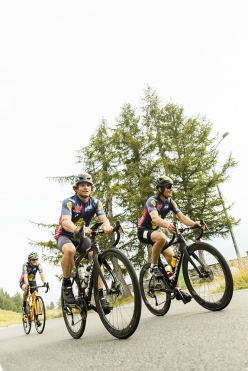 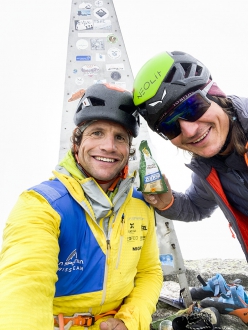 Roger Schäli and Simon Gietl on the summit of Pizzo Badile, after having climbed the Cassin route
Photo by Roger Schäli

With the ascents of Cima Grande di Lavaredo in the Dolomites and Pizzo Badile in the Central Alps, Italian mountaineer Simon Gietl and his Swiss counterpart Roger Schäli have successfully started their North6 project which aims to climb the six most famous north faces of the Alps, traveling from one mountain to the other by bicycle.

After months of careful preparations and then a sudden change of plan right at the last minute due to the weather, the other day at 5:30am mountaineers Simon Gietl and Roger Schäli climbed Via Comici on Cima Grande di Lavaredo, heralding the start of their North6 project.

While this is obviously nothing new, it's worth highlighting that the only means of transport they will use are bikes, paragliders or even skis if necessary. In fact, immediately after Cima Grande, the two pointed their racing bikes towards Pizzo Badile in Val Bregaglia, where yesterday they sprinted up the classic Cassin route on the mountain's north face in three hours. The climbers then scrambled down the North Ridge and, from the base of the route, opened their canopies and paraglided back down to Bondo.

The two mountain guides have known each other for over a decade - at the end of 2009 they established their first route together, on Aguja Poincenot in Patagonia - while in 2018 Gietl carried out a similar project, climbing the north face of Ortler, Cima Piccola di Lavaredo and Grossglockner in Austria with Vittorio Messini. Back then Gietl rode from one peak to the next, but the total distance he covered was just over 600km. Now the plan is to cycle over 1000km, while ascending 30,770 meters and descending 29,470 meters. We'll see how things unfold.