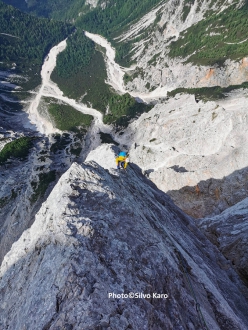 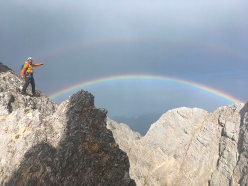 Fleeting moments of happiness: Silvo Karo while making the first ascent of a new route up Široka peč in Slovenia on 12/08/2019 with and Luka Lindič
Photo by Silvo Karo, Luka Lindič 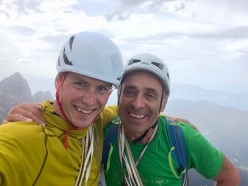 Luka Lindič and Silvo Karo on the summit of Široka peč in Slovenia on 12/08/2019 having made the first ascent of their new route up the mountain's North Face in memory of Franček Knez.
Photo by Silvo Karo, Luka Lindič 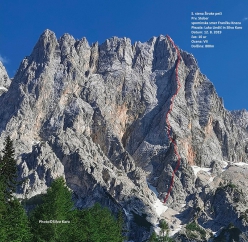 On the North Face of Široka peč in Slovenia’s Julian Alps, Silvo Karo and Luka Lindic have made the first ascent of the striking Pillar in memoriam of Franček Knez.

Representing two entirely different generations but nevertheless Slovenia’s finest, Silvo Karo and Luka Lindic teamed up on 12 August to climb the striking pillar on the North Face of Široka peč, a wild limestone peak in the Martuljek group of the Julian Alps.

"The north face of Široka peč its a famous face in Slovenia" explained Lindic "but beyond the Slovenian border practically no one knows it. It’s known mostly for its really loose rock, and consequently all the routes are a serious alpine outing. I believe there is no single bolt on the wall and most of the routes are the work of the Slovenian climber who placed Slovenian alpinism on a "world map” in the 70s and 80s - Silvo Karo."

Lindic explained how the climb came about "Exactly 10 years ago I was lucky enough to climb with Silvo Karo for the first time. I dare to say he became one of my mentors from whom I’ve learned a lot. We kept a strong bound during all the years but somehow didn't climb so much in the mountains together anymore. Thats’ why I was super keen to tie into rope with him again and try to climb a new line he spotted on the mountain’s north face. When he first showed it to me I couldn't believe it hadn’t been climbed yet as it always follows the wall’s most obvious pillar / arete. Nowadays it’s extremely rare that such a line is still unclimbed."

Karo and Lindic climbed the 800m route in 10 hours. "I only recently climbed a very difficult route, End of Silence, so one might think that the grade VII (UIAA) climbing I encountered with Silvo might have been boring. On the contrary. I quickly needed to remember the art of climbing and placing protection on loose rock. Silvo’s long term climbing partner and Slovenian climbing legend Franček Knez was definitely a master of this kind of climbing. As is Silvo!"

09.10.2017
Goodbye to Franček Knez, Slovenia's silent climber
62-year-old Slovenian mountaineer Franček Knez died on 6 October 2017. Reserved and modest, Knez was considered by many as one of the strongest alpinists of his generation. Published below is a profile written by Slovenian journalist Urban Golob in 2010 when, together with Silvo Karo, Knez was conferred the Order of Merit for his contributions to mountaineering.

18.01.2011
Francek Knez and Silvo Karo, Slovenian Order of Merit for alpinism
On 22 December 2010 the Slovenian alpinists Francek Knez and Silvo Karo were awarded the Order of Merit by Slovenia's President Dr. Danilo Tuerk. This high state decoration was confirmed on the pair for "their achievements in Slovenian mountain climbing and for their contributions to the reputation of Slovenian mountaineering and greater recognition of Slovenia in the world."

07.03.2005
Slovenian Patagonia expedition 2004
In mid January a small Slovenian expedition comprised of Silvo Karo, Andrej Grmovsek, Tanja Grmovsek and Monika Kambic Mali made a series of fast ascents in Patagonia, including the first all-female ascent of Cerro Torre and the "Slovenian start for Cerro Torre"