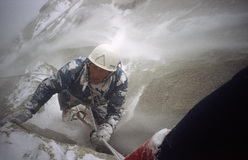 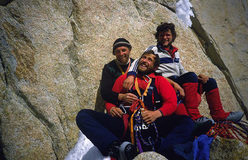 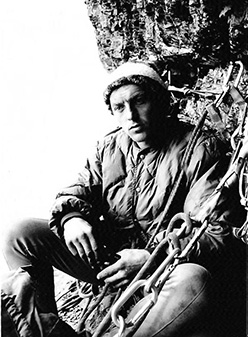 Franček Knez in the bivouac during the first ascent of Fortuna, Eiger North face, 1985
Photo by Francek collection 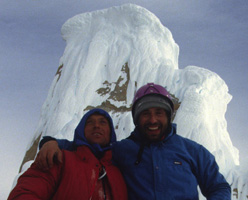 62-year-old Slovenian mountaineer Franček Knez died on 6 October 2017. Reserved and modest, Knez was considered by many as one of the strongest alpinists of his generation. Published below is a profile written by Slovenian journalist Urban Golob in 2010 when, together with Silvo Karo, Knez was conferred the Order of Merit for his contributions to mountaineering.

Franček Knez began climbing back in 1973. Since then he has climbed more than 5000 routes and by the year 2005 he carried out 730 first ascents. He has climbed in the Slovenian Alps, the Himalaya, Patagonia, Yosemite and Andes and is one of ony a handful of climbers who made first ascents in all "Three Problems of Alps" the Eiger, Matterhorn, and Grandes Jorasses . In the summer of 1982 he climbed the original route up the North Face of the Eiger in just six hours, the fastest ascent at the time. He has also traced routes on some of the important faces in the Dolomites, such as the Tre Cime di Lavaredo (Killer on Cima Picolissima and Moč misli - The Power of Thoughts - on the North Face of Cima Grande, now partly followed by the bolted route ISO 2000), as well as the Mamolada, Civetta and Tofana.

Together with Silvo Karo and Janez Jeglič, Franček Knez climbed many difficult routes in the Slovenian Alps, but the three are known above all for their climbs in Patagonia when there was still much wilderness to be explored. First ascents by the "Three Musketeers" as Knez, Karo and Jeglič were dubbed, were carried out on Fitz Roy, Cerro Torre and Torre Egger and highly respected by Patagonian veterans. After his period new routing in Patagonia, Franček progressed to the Himalayas. He played an important role in forging the well-known Yugoslavian route on Trango Tower in Pakistan's Karakorum, as well as for two other routes on the steep rock face of Meru and one of Bagirathi II in alpine style, both in India. He even established a new route on Broad Peak while descending  from Camp II to Base camp. Francek was also – together with Vanja Matijevec – the only man to reach the SW ridge of Lhotse after climbing the South Face of this mountain with a big Yugoslavian expedition back in 1981. During the course of the '80's Francek Knez, the silent climber, made a name for himself among Slovenian alpinists for his new approach to alpinism and especially to rock climbing, and Silvo Karo once described Francek as the guru of modern climbing in Slovenia. He was certainly far ahead of his time and many of his hardest routes, despite numerous attempts, still remain unrepeated.

The Order of  Merit has provided national and international recognition to one of the most powerful climbers who, interestingly, has never searched for media attention and has never promoted himself. Exactly the  opposite is true. He has always been a silent, modest, hardworking man with a regular factory job even while carrying out his unbelievable amount of alpine ascents. The following serves as illustration: despite the regular job and two expeditions in 1983, still managed to make 315 alpine ascents, of which 107 were first ascents. And he never, even to this day, owned his own car or had a driving licence...

Thirteen years ago Francek was involved in a climbing accident due to his belayer at his local crag. He broke his back, but thanks to his determination and positive thinking he completely recovered and he still keeps on climbing new routes in some of his secret places in the Slovenian Alps.  After a long period of gentle persuasion Francek Knez finally wrote his book “Ožarjeni Kamen” a couple of years ago. It has not been translated.

20.01.2015
Triglav and Travnik, important winter ascents in Slovenia by Mrak, Vukotič and Marčič
From  23 - 26 December young Slovenian alpinists Matevž Mrak (23) and Matevž Vukotič (24) made the second winter ascent, and first ever from the base of the face, of one of Slovenia’s most famous routes, Obraz Sfinge on the North Face of Triglav. They did so by climbing the Prusik - Szalay route, for an outing graded VI, M6+ R, AI4, VII- A1 (1000m, 1600m total length ). On 10 January 2015 Mrak, Vukotič and Nejc Marčič (29) made the second winter ascent of the Sveča route (VII- M, 800m) on Travnik in an 18-hour push. Matevž Mrak provides the details.

05.09.2014
Climbing at Paklenica in Croatia
Boris Cujic introduces the Paklenica Gorge, the undisputed reference point for rock climbing in Croatia.

18.01.2011
Francek Knez and Silvo Karo, Slovenian Order of Merit for alpinism
On 22 December 2010 the Slovenian alpinists Francek Knez and Silvo Karo were awarded the Order of Merit by Slovenia's President Dr. Danilo Tuerk. This high state decoration was confirmed on the pair for "their achievements in Slovenian mountain climbing and for their contributions to the reputation of Slovenian mountaineering and greater recognition of Slovenia in the world."

04.02.2008
Ermanno Salvaterra, the Torre traverse and the future of mountaineering in Patagonia
After Rolando Garibotti and Colin Haley's successful linkup of the Torre traverse (Aguja Standhardt, Punta Herron, Torre Egger and Cerro Torre), Ermanno Salvaterra offers insight into the history and the dream of the traverse and his vision of the future of mountaineering in Patagonia.