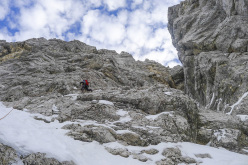 Triglav North Face: Matevž Vukotic climbing a tricky pitch on the lower part during the winter ascent of the routes Prusik - Szalay and Obraz Sfinge, carried out from 23 - 26 December 2014
Photo by Matevž Mrak 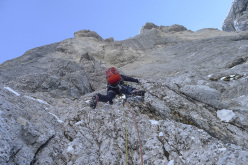 Triglav North Face: Matevž Vukotic on the headwall during the winter ascent of the routes Prusik - Szalay and Obraz Sfinge, carried out from 23 - 26 December 2014 together with Matevž Mrak.
Photo by Matevž Mrak 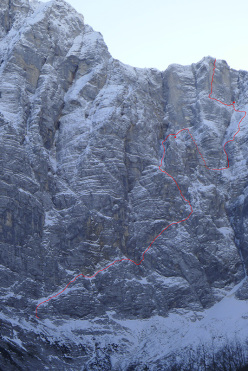 Triglav and Travnik, important winter ascents in Slovenia by Mrak, Vukotič and Marčič

From  23 - 26 December young Slovenian alpinists Matevž Mrak (23) and Matevž Vukotič (24) made the second winter ascent, and first ever from the base of the face, of one of Slovenia’s most famous routes, Obraz Sfinge on the North Face of Triglav. They did so by climbing the Prusik - Szalay route, for an outing graded VI, M6+ R, AI4, VII- A1 (1000m, 1600m total length ). On 10 January 2015 Mrak, Vukotič and Nejc Marčič (29) made the second winter ascent of the Sveča route (VII- M, 800m) on Travnik in an 18-hour push. Matevž Mrak provides the details.

The beginning of this winter season in the Slovenian Alps didn’t look very promising. Little snow and fairly high temperatures for this time of the year forced us to reach out to routes usually climbed in summer.

Before Christmas however things changed and Matevž Vukotič and I set out to climb the North Face of Triglav; we decided to reach the most exposed and inspiring part of the face named Sfinga (Sphinx) via the classic Prusik - Szalay route (Karl Prusik, Roman Szalay in 1929, V/IV+, 1000m).

This climb starts with a long traverse right, past some snow ramps interrupted by a few rock bands. After two dozen pitches with difficulties up to M6 we reached our first bivy spot under the Amphitheatre (the lookout below the Sphinx). We ate almost all our food supplies as we wished to reach the top of the face the next day. However, our wishes were not fulfilled because of bad conditions on the traverse of Zlatorogove ledges and the difficult gully on the climb Obraz Sfinge (The face of the Sphinx).

Our second bivy was located at the start of Obraz Sfinge, for a long time the most demanding route on the face after its first ascent in 1966 and in 1995, when it was finally free climbed by Kresal and Kajzelj, it was the hardest free trad route in the Slovenian Alps. The first winter ascent was carried out in 1977 by legendary Slovenian climber Franček Knez; the party approached the top of the face and rappelled to the base of the Obraz sfinge before climbing it in a day. But the route was still waiting for its ascent from the bottom of the wall in the winter.

We had to negotiate a 150m traverse in the morning in order to reach the headwall. The traverse was in bad conditions and it took us 6 hours to reach the headwall. In six psychically demanding pitches we reached the headwall in almost complete darkness, so we abandoned our wishes to free climb the crux. The rest of the route was dry and with lots of pitons we progressed faster. After two bivies we reached the top of the face. Due to fog we got lost during the descent, so it took us seven hours to reach our car in the Krma valley. It proved an interesting Christmas adventure.

After recovering mentally and physically from the previous climb - Matevž Vukotič and I teamed up with Nejc Marčič to climb the North face of the Travnik. On the approach I realized I had forgotten my climbing shoes and I also noticed that the sole of my shoes had just detached, so Nejc gave me his climbing shoes, two sizes smaller and very painful indeed. After just three hours of sleep at the Tamar hut we set off at two in the morning and reached the base of the wall at five. The first pitches were covered in snow and took us a lot of precious time. The hardest part of the wall was dry. In last light we climbed the last hard pitch of the Sveča route. Ten mixed pitches were left to reach the top of the Travnik. After 18 hours of climbing we collapsed at the summit snowfield and prepared for the long descent to Vršič pass.