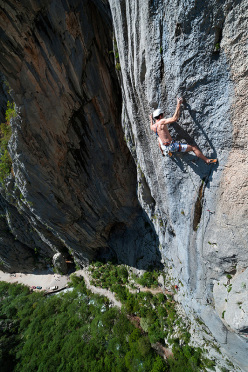 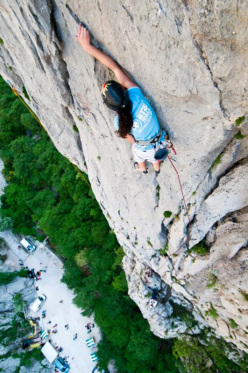 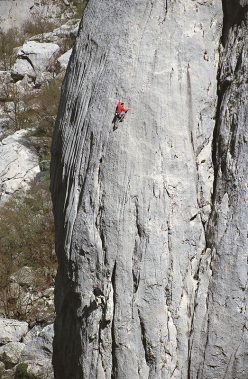 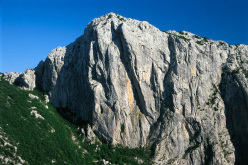 Climbing at Paklenica in Croatia

If you mention Croatia as a climbing destination, the first area that comes to mind is the Paklenica gorge. Understandably so, for of all the great climbing areas in Croatia, Paklenica is definitely the biggest and most popular of all.

The reasons for this lies in Paklenica’s beauty: the National Park is widely consider one of the most attractive natural reserves - and tourist resorts - in the northeast Mediterranean. The grandiose gorge is surrounded by harsh mountain cliffs, distant peaks of Velebit and old pine and beech forests - a true paradise for nature lovers, scientists and climber. While from a climbing perspective the area is characterised by its huge variety of karst formations, the seaside nearby and coastal atmosphere only add to the beauty of this park.

The choice of routes varies from pure sport climbs to long multi-pitch big wall outings up to 350m in height. On the sport climsb the difficulty varies considerably, too, from very easy beginner routes to extreme testpieces, and the style varies from short, well protected slabs to huge and difficult overhangings. The bigger walls contain numerous easy and moderate bolt-protected ridges and slabs while the difficult multi-pitch sport routes cross steep, sustained terrain with difficulties up to 8a. Furthermore, there is a selection of beautiful traditional routes, protected with nuts and with camming devices. For those who wish to try something a bit different, there is a handful of interesting aid routes, too, plus some very hard projects. In short, at Paklenica there is something for everyone.


SHORT HISTORY
The first climbers came to Paklenica in the late 1930's, and the first route put up in the gorge is the Brahm route in 1940. Between 1957 and 1969 it was predominantly Croatian climbers who established new climbs and many of these are nowadays considered true classics such as Mosoraški (1957), Velebitaški (1961) and Klin (1966), to name just three. This period was followed by a series of visiting Slovenians who were very active at establishing new routes. One of them was legendary Franc Knez: he immediately changed the concept of climbing and discarded the word impossible. He put up circa forty routes and even today many of these are still considered some of the hardest at Paklenica.

The spirit of free climbing came to Paklenica thanks to I. Tomazin and his free ascent of Brid za mali čekić (6c+) in 1978. The early 1980's was the period marked by a sudden rise in difficulty levels, and the turning point was in 1982 when Klin (6c+) was finally free climbed, followed by other important free ascents such as Funkcija (6c+) and Jenjavi (7a+).

The first short sport climbs were put up at Klanci, the narrowest section of the canyon, by Italy's Mauro Corona who set the ball rolling with his Stimula, 7a. Shortly afterwards his famous compatriot Manolo made the first ascent of what is still the most difficult route in Paklenica: Il Maratoneta (8b+).

In 1986 Srečo Rehberger and Tadej Slabe solved what was considered the biggest free climbing challenge in Paklenica, namely the famous Brid klina (7c) up the the edge of prominent formation in the middle of the main wall. The first ascent of this legendary multi-pitch aid route took 30 days, of which 8 were spent in a row on the face and this route became a symbol of the "iron age" of climbing.

In 1990 Paklenica was visited by the Remy brothers. They climbed two beautiful, difficult routes: Rajna (7a) and Wellcome (7b+). Both routes were climbed in modern style: free, with bolts placed on lead. During this period the most difficult aid route were also established, namely Jogananda (A4).

Due to the war the park was closed for a couple of years and all activities came to standstill. When the park finally reopened in 1995, the new era was immediately marked by a great new route, Waterworld (7b+), climbed by Austrians Ingo Schalk and Gerhard Grabner.

The most active climbers of the current, most recent period are the Croatians Boris Čujić and Ivica Matković who take credit for a whole range of new routes such as Zlatne godine (7c) or Vila Velebita (7b+). The duo also rebolted and reequiped numerous old routes, substituting innumerable bad bolts. They also climbed some kind of crown of anića kuk: the longest route which is Zenit (7b).

Further credit for beautiful, difficult routes must go to Italians Aldo Michelini and his wife Laura Ortolani who established routes such as Alan fjord (7c), Bubamara (7c/c+) and Mjesečina (7c/7c+). Other Italians, such as Paolo Pezzolato and his partner Sara Gojak can be considered another real "asset" to Paklenica and it a whole range of beautiful, well-equipped routes on almost all rock faces of Paklenica are theirs.

Another difficult sport climb worth mentioning is Spider (8a), first climbed by Marko Lukič and while the possibilities of logical new routes at Paklenica's biggest face, Anica kuk, is rapidly diminishing, one of the most recent ones to be freed was Himalaya sport (7c+) by Croatian climber Igor Čorko together with his local climbing partner Marko Marasović. Igor has climbed almost all of the hard routes in Paklenica.

While the chance of discovering something new on the gorge's big walls is pretty small, there is still some potential for some hard sports climbs at Sektors such as Rupe, as well as further away, outside the gorge.