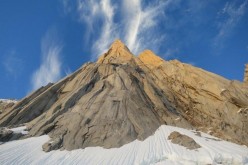 Luka Krajnc and Tadej Krišelj from Slovenia have made the first ascent of The Real Kekec, an important new route up Pilar Goretta on Fitz Roy in Patagonia.

Recent news from Patagonia: on Pilar Goretta, the slender leaning pillar located on the East Face of Fitz Roy, the Slovenian alpinists Luka Krajnc and Tadej Krišelj have forged The Real Kekec.

The new line begins to the left of Hudičeva zajeda, the Devil's Corner established 30 years ago by fellow countrymen Silvo Karo, Janez Jeglič and Franček Knez and which for this superb trio marked the start of an important period of first ascents in Patagonia. After sharing a pitch, The Real Kekec breaks out right to climb circa 800m of virgin terrain. Just below the top of the pillar it shares the final pitch with the Casarotto, the extraordinary route first ascended in 1979 solo by an even more extraordinary Renato Casarotto route who dedicated the pillar to his wife Goretta. After a bivy on the top of this pillar the two Slovenes followed the Casarotto route to the summit of Fitz Roy.

Breaching difficulties up to 6c+ and A2, Krajnc and Kriselj established the route in pure alpine style, without bolts, in five days with three bivies during the ascent and one during the descent. Commenting on the Slovenian website www.friko.si they reported "We were able to find wonderful climbing within a very steep and at times overhanging rock. It took three days and two bivouacs to reach the top of Goretta Pillar. At the top we bivouacked the third time and on the fourth day we reached the top of Fitz Roy via Cassarotto route. We descended via French route and have bivouacked for the fourth time in La Silla col. On the fifth day we descended to the base of the wall, collected the gear we left there before the ascent and continued out descend to Passo Superior. After three days of climbing we ran out of food."

Bearing all these factors in mind it is clear that this new route is indeed quite particular, as was underlined by Patagonia veteran Silvo Karo who stated "I am glad and proud of today’s achievement, which we can mark with a ìMade in Slovenia' emblem."

For the line of ascent visit www.pataclimb.com, for more photos and futher information visit www.friko.si.