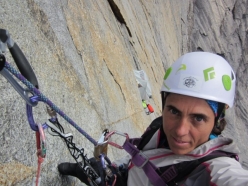 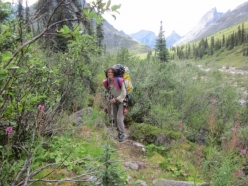 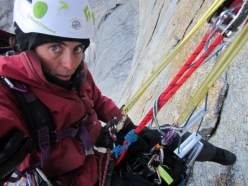 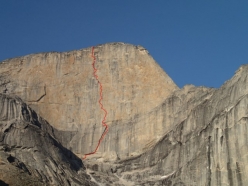 Formidable Catalan alpinist Sílvia Vidal has climbed Un pas més (One more step), a new route ascended in complete autonomy up the West Face of Xanadu in the Arrigetch Peaks massif in Alaska. Vidal spent 17 days on the wall forging the 530m line past difficulties up to A4+, but in many respects the actual climbing was the least demanding part of the entire trip. A staggering 36 days, for instance, were spent hauling the 150 kilos of food and gear needed for the 53 days she spent alone in the remote Alaskan valley.

Vidal recounted "I had no external help, no radio or phone to communicate, or to be able to know the weather forecast. The seaplane for my return back was agreed two months in advance; a specific day and a take off place. It was an exercise in trust, because even if could have walked for days, I probably would not have gotten anywhere." It is worth noting that this is bear country, as Vidal soon found out. "I saw bears and although things went well, it was extremely scary and I had a difficult time. Not only during the actual encounters with the bears, but also during the rest of my stay, until I managed to transform my fear."

During her trip Vidal was not entirely on her own, as two American teams operated independently on the same peak. The first team climbed a new route to the right of Un pas més and according to Vidal they were the first to summit the West Face of Xanadu. As Vidal was packing up in August she met another American team who climbed a route further to the left. While the Americans established base camp down in the valley, Vidal chose not to as this implicated more gear transporting. Instead. she chose to ascend to the col on the left and access the face proper by traversing along a ledge before spending 17 days on the wall.

Vidal explained "The route is 11 pitches long. There are 3 bolts on the pitches (on pitches 1, 5 and 6) all without hangers and 12 bolts at the belays. 2 belays are "clean". On the first pitch I placed a bolt and when I cleaned it, I took the screw out of spite. Like that I was committed, I wouldn’t have been able to put it back in."

The route breaches difficulties up to A4/A4+ aid. "This is exactly what I look for" Vidal told planetmountain.com "it’s what allows me to establish a route under these conditions, being in mind the weather, onsight, alone and with all the weight of gear. The hardest pitches have short sections but are precarious. Basically they go through the steep face, in general I used hooks in a row."

Describing the granite rock quality as generally good, Vidal mentioned that it is "sometimes sandy, therefore small copperheads didn’t hold out. There are some loose blocks and more face climbing than crack systems. There are expanding flakes and inverted slabs that made the solo ascent more complicated, as the ropes were usually stuck and I had to rap down to remove them. Sometimes a couple of times in a pitch."

Vidal concluded "This is just the technical information, but after this kind of experience, on my own for weeks, without communication, having transported all that gear, having dealt with bears, rivers, uncertainties, doubts and fears, the route is always the least of it all. The real challenge is all the rest."