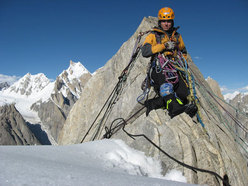 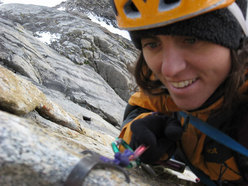 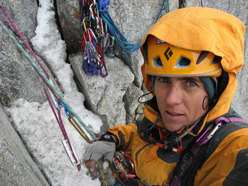 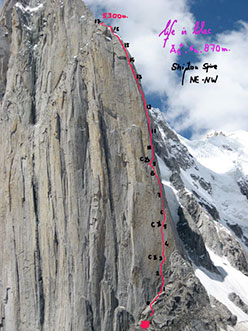 In July Sílvia Vidal from Spain made the solo first ascent of "Life is Lilac" (A4+, 6a, 870m) on the NE Pillar of Shipton Spire, Trango, Pakistan

In July Sílvia Vidal, one of the world's most accomplished big wall specialists, first ascended "Life is Lilac" on the NE Pillar of Shipton Spire, Trango. Climbing completely alone, the Catalonian spent a total of 21 days ascending a 870m line close to the Slovakian Prisoners of the Shipton. The new route finishes at circa 5700m altitude at a saddle where it meets up with the famous Ship of Fools (VI 5.11 A2 WI6, 1300 m, Jared Ogden e Mark Synnot) and checks in at a staggering A4+, 6a. The full expedition report of Vidal's first Trango experience is published below, while details of her impressive career can be downloaded here.


Life is Lilac - Shipton Spire, Trango, Pakistanby Sílvia Vidal
"When I arrived at Shipton BC I had no idea about what to climb. I had two different options: repeat "Baltese Falcon" or try to put up something new on the NE pillar, up until the point where "Ship of Fools" takes the buttress. I decided for the second option because, going alone, it seemed safer and better for hauling,

I travelled to Pakistan with 3 friends of mine. They wanted to climb a new route on the right side from "Baltese Falcon" but a rock hit one of them. So they decided to return home. I only found this out after my 21 days on the wall, when I descended and returned to BC where my guide, cook and a nice note and drawing were waiting for me. Since I didn't have a radio or phone they couldn't have let me know that they were leaving for home.

On the day we arrived in BC I took 5 porters and we went up to the glacier to the highest point we could get to without crampons, crica 2 hours from BC. There I set up a tent and after a day spent at BC studying the wall and choosing a line, I moved up to ABC (4450m). During the next 8 days I started carrying stuff up and fixing the first 200m. The approach to the base of the wall, with all the gear, took me 2.30 hours each time.

I then returned to BC for a rest day and early the next morning I went up directly to the wall to haul two big and haulbags to the 3rd. belay, where I established my first bivvy.

During the 21 days on the wall I suffered pretty bad bad weather: it snowed for 12 days. This meant that I climbed every day as much as I could until my hands and my head forced me to stop, except for one whole day which I spent on the portaledge. I spent so many hours inside the bivvy during these bad weather days that I tried to imagine what colour life is. And for me, at that moment, it was was lilac. This is how the name of the route came about: Life is lilac. Why not?

The rappels were really hard because of the haulbags. The gear was really heavy, but there were also some traverses and I couldnxt move the haulbas to the next belay. I only weigh 47kg, perhaps even a bit less during the expedition.

I had planned to rap to the ground on July 29 but I failed to descend completely and I spent the night in the middle of a rappel, on a really bad ledge, without a portaledge and with little water and no food. On the next day I arrived at the base of the wall. During one of the upper rappels my rope got stuck and after an hour trying to recover it I cut it. I know thatxs garbage on the wall, but I really couldn't do anything about it. This has happened to me on some other occasions and in the past I'd climbed the pitch again. But now, there was no other option, it was my only dynamic rope. The rappels are the same belays as on the line of ascent the route. I placed at least one 8mm bolt on each belay, except the first.

I lived on the wall from 10 July to 30 July after some days fixing. The top of the route is at circa 5300m, and the 870 metres are graded A4+, 6a. I found it hard to free climb the pitches with natural protection basically because I had too much weight, because of the cold and because and the Soloist didn't run properly for free climbing. I tried some butx

On the lower section there is no natural line and only hard aid climbing. One pitch is graded A4+, maybe a little bit more, who knows?. The route starts on the NE face and some middle pitches move onto the NW face, before ending on the NE face again. I shared the last belay with Prisoners of the Shipton, reaching it from the rear.

After the summit I descended and started to carry down all the gear because at midday the following day the porters came to ABC. What I carried up in 8 days, I carried down in one. Crazy!"