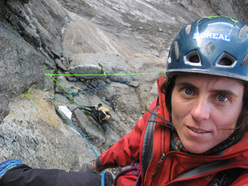 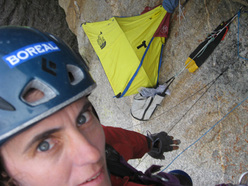 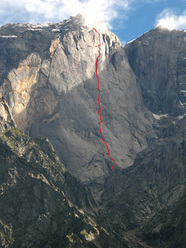 Big wall. Aid climbing. Alone. This is what immediately springs to mind when you hear the name Sílvia Vidal, and after hanging out with the boys on Baffin Island last September, this summer the climber from Catalonia lived her dream once again spending 25 days along on a remote, unnamed wall in the Kinnaur Valley, Himachal Pradesh, India, establishing "Naufragi" (1050m, A4+/6a+). Her report is published below. What is worth underlining is A4+ established solo, at 5250m, during one of the worst monsoons in living memory... easy to understand why she felt shipwrecked and opted against continuing to the main summit.


Here is some information about the last ascent I did this summer in Kinnaur Valley, India. It was a solo ascent and I spent 25 days (from 15th August to 8th September included) on the wall, during this summer's strong monsoon. It was a tough experience for me. I travelled to India accompanied by my friend Eulàlia Sancho, she accompanied me to BC and then left to continue her trip. As always I didn't take a phone, Internet or any kind of device to communicate.

The result was "Naufragi"' (shipwreck in Catalan), 1050 meters high, A4+/6a+ at 5250m in the Kailash Parbat range. I didn't reach the main summit which was still distant - the mountain is huge and I didn't even manage to see the top - but I reached the end of the main wall.

All the information I had was a picture of the wall and where it was located on Google Earth which I had found on John Middendorf's webpage. Once in the valley, I didn't know where to start the approach so I showed the picture to the locals and after having hired some porters, we started walking in the rain.

The porters dropped the haulbags in the fog at 3800m and then left. During the 7 days I spent at this BC I never saw the entire wall, and I spent two days trying to access the wall because there was zero visibility and I had no idea were it was. I had to fix some ropes on the way up as the approach was like trying to hike up a river ravine. Complicated and slippery.

I established ABC (4430m) close to the wall, a portaledge hanging on a boulder, because there was no flat outcrop to place the tent between BC and the base of the wall. I fixed the 3 first pitches (150m) and then spent 25 days on the wall, alone, in horrible weather, because this year the monsoon was particularly bad. From the month and a half that I spent up on the mountain, there was rain and fog every single day. A local newspaper stated that the Kinnaur valley received 156% more rain than usual this year.

I climbed some completely natural A4 and A4+, but on some sections there was no natural line for extreme aid climbing and so, fighting against my principles, from the 10th pitch (14 day) onwards I started to drill some bat hooks - holes for the aid hooks -  to progress through the monolithic face. I didn't do this to increase the aid climbing grade, but because otherwise I wouldn't have been able to continue upwards. That's the price I had to pay for going on an expedition without knowing anything about the area or the wall.

One day, when jumaring, I lost consciousness, due to hypothermia because of excess of humidity. I had rationed food and water for 18 days and in the end I spent 25 days up there. This and the bad logistics were the reason that thoughts of quitting crossed my mind on various occasions. At one point I down-climbed part of a pitch but then I realised that I didn't want to leave the wall, I was too motivated to leave despite the terrible weather and all the hard work I had put in. I always believed the weather was going to change, but it didn't...