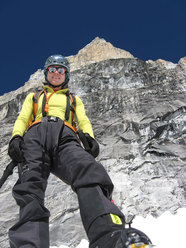 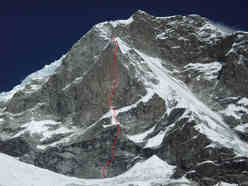 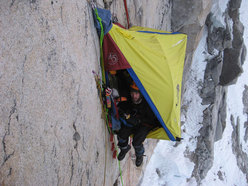 From 23 July to 9 August Silvia Vidal and Youri Cappis carried out the first ascent of "Entre boires" A3/6a+/80º on the East Face of Huascaran North (Cordillera Blanca, Peru).

Silvia Vidal continues to explore the world's biggest walls. From 23 July to 9 August the Catalan climber teamed up with Youri Cappis to carry out the first ascent of "Entre boires" A3/6a+/80º on the East Face of Huascaran North (Cordillera Blanca, Peru). Her expedition report is published below:

Entre boires, Huascaran North, Peru
by Silvia Vidal
From 23rd July to 9 August, after 7 days hauling all the stuff to the base of the wall, acclimatising and fixing the first 200 meters of the route, Youri Cappis (from Switzerland but now living in Catalonia) and I climbed a new route on East Face Huascaran North.

Youri had no previous experience on Big Walls, but he wanted to come along and experiment living on a wall for numerous days, at altitude and without any connection to "civilization". 10 days before starting for Peru he had never even used a Jumar. He practiced it for 2 days and... came along. It turned out to be an amazing experience for him and also for me!

We established ABC at 5200 meters and after the 7 days acclimatizing, hauling and fixing, we started up the wall. Our intention was to climb a rock triangle and then continue to the top. We failed to reach the summit because of bad weather, ice conditions and because of the extremely difficult return to our portaledges.

The main difficulty of the route was the route finding, this proved complex climbing upwards and even more difficult in descent. The first section is marked by numerous roofs which we attempted to avoid. The middle section is comprised of snow and ice up to 80º and hauling and rappelling with haulbags proved tiring. The final section is overhanging and the rock quality changes considerably, from very loose to bomber. Thankfully the line of ascent is direct and easy up this final section.

Access to the wall is pretty dangerous because of the avalanches from the serac in between the two Huascaranes. Furthermore, the base of the wall is prone to rockfall and our fixed rope was cut in two places. While the route itself is pretty safe thanks to the big roofs and the overhangs, we encountered difficulties rappelling through the overhang spent two and a half days abseiling down through the roofs, traverses and snow sections.

We spent a total of 18 days (17 bivouacs) on the wall and did not have a single day of excellent weather. Intense cold froze our waterbottles and caused some troubles with our feet, hands and nose. As a result I spent some days soloing pitches while Youri rested on the portaledge.

It seemed to us that we were climbing up a virgin wall and we had failed to find any information about other possible routes. This had been a really bad season in Peru and although we had some sunny moments, we climbed almost entirely through fog and snowfall. That's why we called the route "Entre boires", which in Catalan means "inside the fog".