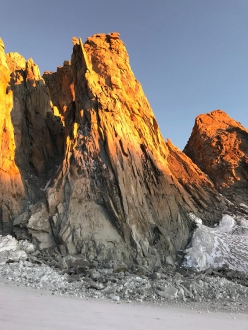 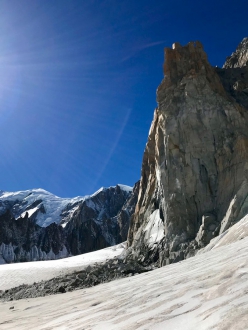 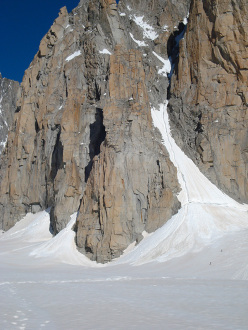 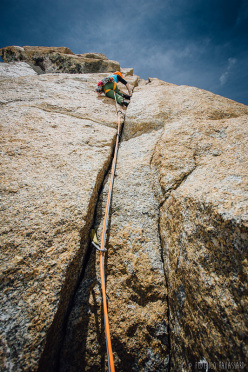 A huge portion of the South Face of Trident du Tacul in the Mont Blanc massif rained down onto the glacier some time last night. It is obviously too early to say precisely which routes have been affected by the rockfall on one of the most important granite towers close to the Grand Capucin, but according to the mountain guide Enrico Bonino who had been climbing on peak yesterday, at least "one third of the South Face has swept away, taking with it some classic climbs like Lépiney and Les Intouchables. Furthermore, we’ll have to see which climbs on the nearby east and west faces had been damaged."

Bonino climbed the East Face yesterday with his partner Ilaria, but throughout the morning the two heard worryingly deep noises, remarkably different from the usual sounds made by the Bergschrund moving or rockfall whizzing down gullies. "The tension was palpable: on the third pitch we decided to rappel." This morning his colleagues inspected the tower and immediately noticed the rockfall.

"On a mountain such as the Trident du Tacul you don’t really expect rockfall like this, also because these "satellites" are a symbol for solid rock in Mont Blanc massif" the Aosta valley guide told planetmountain.com, adding "It is a obvious warning of climate change, that has come after an extremely hot August and the last snowfall that took place two days ago. It’s a warning that should make all alpinists stop and think, beginners and experts alike. We have to change our approach to these faces, regardless of whether the climbs are on ice or rock, the danger is serious and ever-present. We all need to listen and pay more attention to the signals that nature is giving us."

14.08.2014
Astro Zap on Trident du Tacul by Bassanini and Camurri
On 4/09/2013 Giovani Bassanini and Lamberto Camurri made the first ascent of Astro Zap (7a), a line that climbs the crack avoided by the Via Diretta Bonatti, first climbed by Walter Bonatti and Cosimo Zappelli in 1963 up Le Trident du Tacul in the Mont Blanc massif.

06.07.2012
Aiguilles du Dru, new North Face rockfall
On 05/07/2012 a section of the North Face of Petit Dru (Mont Blanc) was affected by rockfall. This collapse follows in the wake of numerous other falls in recent years.