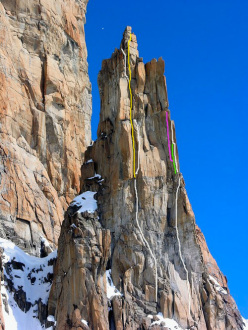 Astro Zap on Trident du Tacul by Bassanini and Camurri

On 4/09/2013 Giovani Bassanini and Lamberto Camurri made the first ascent of Astro Zap (7a), a line that climbs the crack avoided by the Via Diretta Bonatti, first climbed by Walter Bonatti and Cosimo Zappelli in 1963 up Le Trident du Tacul in the Mont Blanc massif.

The upper section of the SW Face of Le Trident du Tacul, above the Lepiney ledge, is marked by a series of pristine cracks. As crack climbing evolved, parts of this face began to see attention that were deemed particularly beautiful and/or difficult. Wedged into just a few metres on the righthand side there are the routes Les Intouchables (Bouvard, Piola) graded somewhere in the region of 7b+ and 7c, the Bassanini Variation (7c+) that leads into Les Intouchables, both completely trad. From the lower section of Bassanini, with a long move left (bolt) there is Super Purple Crack (Potard), an 8a finger crack.

Further to the left, after the route Eclipse, a wide overhanging crack rests on a perfect cracked corner. The Bonatti Zappelli was first climbed in 1963 and, after reaching the base of the corner, traverses right up a series of thin cracks, all with in-situ gear, before returning into the chimney past some aid climbing to exit left onto easier terrain. Astro Zap is the name of the direct line climbed by Giovanni Bassanini and Lamberto Camurri on 4 September 2013: it sets off up the the splitter crack, vertical at first and then overhanging (6c) and reminiscent of Astroman on Washington Column in Yosemite, before tackling the chimney (6b+), and then the long overhanging hand crack (7a). The belays have been bolted by Francesco Civra, while the route is named in honour of Cosimo Zappelli who removed a large number of the 90 pegs and wooden wedges used during the first ascent of the face.

Gear: 2 full sets of cams, 1 camalot #3. Take a gear bag to the Lepiney ledge. Abseil down the route Eclipse.