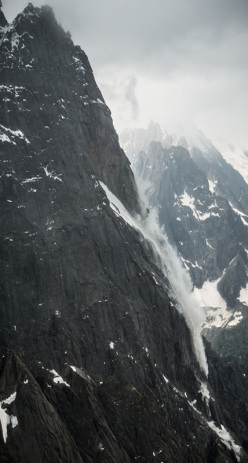 On 05/07/2012 a section of the North Face of Petit Dru (Mont Blanc) was affected by rockfall. This collapse follows in the wake of numerous other falls in recent years.

After the imposing rockfall on the West Face of Petit Dru last September, yesterday morning at circa 9:40am major chunks of granite fell from another section of the beautiful mountain in the Aiguille Verte group of the Mont Blanc massif. This time the rockfall affected the North Face of Petit Dru.

French alpinist and photographer Alexandre Buisse, who was climbing the nearby Aiguilles Rouges at the time, witnessed the fall and told planetmountain.com: "The rockfall was fairly big, but not as big as the one which took place last September. It lasted for about 15 seconds and came from up high on the North Face. It might have detached from the classic Pierre Allain route, or somewhere nearby, and probably this route won't be climbable this summer. The weather has been pretty poor recently  and the forecast for the next couple of days wasn't good, so it's highly unlikely that anyone was on the climb and this might explain why no helicopter took off to examine the situation."

The North Face hosts two routes, the classic Allain - Leininger established from 31 July to 1 August 1935 by Pierre Allain and Raymond Leininger and the Voie Lesueur, first ascended by the brothers Pierre and Henri Lesueur from 25-27 July 1952. For those planning on climbing in this area, we highly recommend checking out route conditions with the Chamonix or Courmayeur mountain guides.

For more photos check out www.alexandrebuisse.org/blog