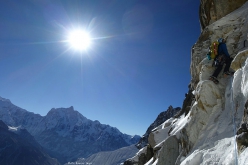 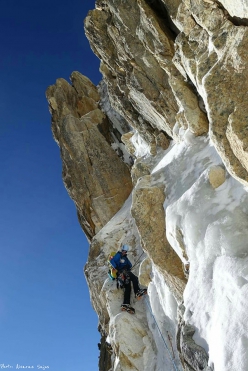 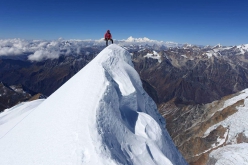 Aivaras Sajus on the summit of Sharphu II, Nepal, Himalaya on 26 October 2018 after having made the first ascent with Spencer Gray
Photo by Spencer Gray

In October 2018 Spencer Gray and Aivaras Sajus made what is likely to be the first ascent of Sharphu II (6328m) in Nepal's Kangchenjunga region. The route climbs the mountain’s east face, was climbed alpine style over a six-day period and has been called Saṃsāra (ED2 AI5 M6).

Sharphu I and II are twin peaks that share a steep east aspect. Japanese expeditions climbed nearby Nupchu Peak (currently mislabeled as Sharphu IV on the HGM-Finn map, see 2015 AAJ note) in 1962 and Sharphu I (6433m), the highest of the Sharphu group, in 1963. We are unaware of another team climbing Sharphu II.

We approached via the Kangchenjunga base camp trail using horses and yaks. We set up base camp west of the small village of Khambachen at 4,550m in a yak pasture beside Nupchu Khola. This valley is inhabited by blue sheep and Tibetan wolves as well as snow leopards, which have been known to prey on villagers' yaks.

After acclimatizing and scouting the peak for a week, we established a high camp at 5,600m at the Bergschrund below the east face and acclimatized there for one more day. The approach to the bergschrund briefly crosses into the runout zone of active seracs.

The east face has four prominent cliff bands on its lower half and several gully systems that extend to the summit ridge. The shaded aspects of these cliff bands held good ice. The rock was mediocre. We linked together a line by climbing ice and mixed terrain through one gully, then traversing a snowfield below a dry cliffband into a second gully that we followed to the summit ridge. We camped once on the face under a full moon and the next night on the summit ridge with a steady 30mph wind and cold temperatures (-25C). Sharing one sleeping bag saved weight and encouraged shivering.

We summited on October 26 by a final short snow ridge, then descended the snowy north ridge. After several rappels past summit rime snow and cliff bands interspersed with about 400m of steep downclimbing, we spent a final night on the glacier between Sharphu II and Sharphu VI and descended to base camp on our sixth day after departing.

The adjacent east face gullies hold similar terrain with sections of excellent ice. In six days on the mountain we have observed only one rockfall incident, but it was a significant event directly down the first 200 meters of our line (after we had passed).

We thank the Sherpa family that owns the White House in Khambachen for their generosity and help.

18.06.2018
Janhukot first ascent in Indian Himalaya by British expedition
British mountaineers Malcolm Bass, Paul Figg and Guy Buckingham have made the first ascent of Janhukot (6805m) in the Garhwal Himalaya in India.