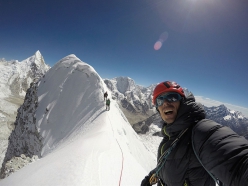 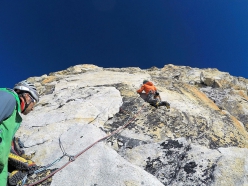 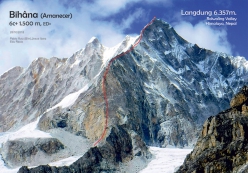 At the end of October 2018 Spanish mountaineers Pablo Ruix (Blín), Jesús Ibarz and Edu Recio established a new route up Langdung (6357 m) above the Rolwaling valley in Nepal. Ibarz reports about their Bihâna (6c+, 1500 m, ED+).

It took us three days to reach the village of Na, from where we started to transport our gear material onto the Ripimo glacier where we established base camp at 5100 meters. Our original goal was to climb the south face of Dragnag-Ri, 6801 m. The face is 1300m high, protected by a difficult approach which would have entailed toilsome logistics for the time we had available. This is why, after following Mikel Zabalza’s advice, we headed towards Langdung.

Langdung is a 6357m peak located at the end of a remote glacier, on the border with Tibet, which had remained virgin until last winter when a team of Nepalese guides made the first ascent (Namaste, SE Face and SE Ridge, Dawa Sherpa Gyalje, Dawa Sherpa Yangzum, Nima Sherpa Tenji, Pasang Sherpa Kidar, alpine style, 5 days November/December 2018).

Ignoring this wall of red granite that glistened in the sun since early dawn was impossible. Langdung is an imposing mountain with a granite face about 500 meters high, followed by an over 1000m ridge. This was our goal.

It took 6 days to complete the entire route. On the first day we approached base camp from Na, during the second day we moved our tent up to advanced base camp. On the third day we took our gear to the face and climbed several pitches, including the hardest one of the entire route: a friable 6c+ chimney that Blin solved as if it were close to the ground. That night we slept back in our tent, where the temperature dropped to -16 degrees.

The next day we set off at 3:00 am, so when dawn broke we were already climbing the pitches on the upper section of the route, past difficulties between V+ and 6b. At about 11:00 am we reached the start of the ridge proper, where we climbed past alternating sections of rock and ice, while conditions varied greatly depending on the exposure of the ridge.

After several hours of climbing, the ridge still seemed never-ending. Sections of IV and V, and others marked by poor quality rock, rendered the climbing extremely delicate. Moreover, not being particularly well acclimatized, we were aware that the altitude increased with every step we took.

From the ridge we were able to see the nearby Khumbu valley, with mountains like Everest, Lhotse and, further north, Cho Oyu. The vista was incredible. We reached the summit, exhausted, at around 16:00. Our idea was to follow the ridge back again and retrace our steps, but because of its length, we decided to change plans and descend to the glacier via a gully on the west face.

The descent proved to be very long and what initially seemed like a quick retreat turned into countless abseils. The lower we descended, the worse the rock became. At around 23:00 and after about 18 rappells we reached the Bergschrund where we continued to descend towards the warmth of our tent as soon as possible. Back on the glacier we finally returned to our tents, reached after several more abseils, at 24:00, after 21 hours of incredible but tiring climb.