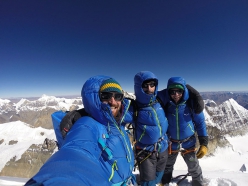 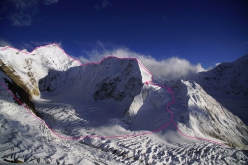 Vitus Auer, Sebastian Fuchs and Stefan Larcher have added a new route to Mount Himjung, the 7092m high mountain to the northeast of the Annapura massif in Nepal. The peak was first ascended in 2012 by the Koreans Chang-ho and An Chi-young via the south face; over three days this autumn the mountaineers climbed the long west ridge with one bivouac, reached the summit and descended down the unknown north ridge before returning to their bivouac.

After establishing base camp about 4800m the trio acclimatised by climbing for three days up to 6000 meters along the Carlsberg Ridge, one of the four seven thousanders in the valley. A second acclimatisation trip lasted two days and took them to 6150m along Himjung’s SE Ridge to check the feasibility of a new route along this feature.

Vitus, the brother of world-famous mountaineer Hansjörg Auer, told planetmountain.com "We originally set out to climb Himjung from the east, following the long and unclimbed SE Ridge, but we didn’t receive permission to explore the valley that led to mountains eastern flank. So we only managed to explore the mountain from the west and establish base camp there. Nevertheless, we wanted to explore the SE Ridge and that’s why we made this acclimatisation climb to the valley head. It was during this that we realised the rock was friable and extremely steep. But we also noticed the absolutely unique line along the West Ridge and this is then what we climbed."

Due to a favorable weather forecast, the trio set off for their summit push earlier than expected, leaving base camp at 7 am on 31 October. At 17:00 they reached Camp 1 at 6180 meters, then after only two hours rest they set off at 23.00, climbing the ridge throughout the night. Gusty winds picked the higher they got and they summited at 09:00 the next morning. After a short rest they continued down the north ridge. "The descent proved difficult, a 50° flank at 7000 meters, we felt were tired." Vitus explained, adding "We fled downwards, but the 250 meters ascent to return to Camp 1 was horrendous. We finally reached our tent at Camp 1 on 1 November at at 20:00." At 16:00 the following day they returned to Base Camp.

For all three Himlung marks a startling Himalayan debut. Vitus explained "For the first time we saw with our own eyes that the dimensions of the se mountains really are completely different. This was the first real expedition to Nepal for all three of us and it proved interesting dealing with the altitude and seeing how our bodies reacted. Obviously the expedition was exciting because we didn’t know what to expect. There was no description to follow, because no one had ever been there beforehand. We were extremely lucky during the ascent and descent that we never had to face and sections that were technically too difficult - as it was, what we breached was sufficiently difficult. Everything evolved in a completely different manner to what we imagined and planned. The team spirit was fantastic, despite the fact that we didn’t really know each other particularly well beforehand."

12.11.2012
Piolets d’Or Asia, the 2012 winners
The 7th Piolet d’Or Asia 2012 was held in Seoul, Korea on 9/11/2012. The alpine award went to the Korean mountaineers Kim Chang-ho and An Chi-young, as well as Zhou Peng and Lee Shuang. Denis Urbko from Kazakhstan won the achievement award.