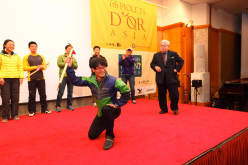 The Koreans Kim Chang-ho and An Chi-young, winners of the Piolets d'Or Asia 2012
Photo by Im Duck Yong 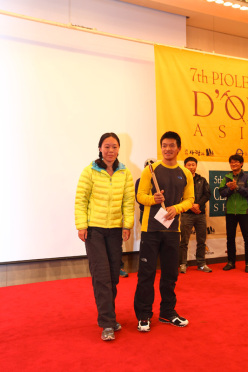 The 7th Piolet d’Or Asia 2012 was held in Seoul, Korea on 9/11/2012. The alpine award went to the Korean mountaineers Kim Chang-ho and An Chi-young, as well as Zhou Peng and Lee Shuang. Denis Urbko from Kazakhstan won the achievement award.

It went to two teams, this year's Piolets d'Or Asia. The oriental ice axe, in short, is in the plural form, and this year two different expeditions received the award: Korean's Kim Chang-ho and An Chi-young for their ascent of Himjung (7140m) in Nepal, and China's Zhou Peng and Lee Shuang who, together with compatriot Yan Dongdong, climbed a series of new routes in the Sichuan.

Kim Chang-ho and An Chi-young won the prestigious award for their ascent of Himjung (7140m), Nepal's highest unclimbed mountain until last November what the two Koreans forged a route up the SW Face. Setting off on 9 October, Chang-ho and Chi-young reached the summit three days later, enduring temperatures down to -22°C and negotiating avalanche prone slopes.

Zhou Peng and Lee Shuang received recognition for their Sichuan routes which include the NW Face of Jiazi (1500m, M6 WI3, two bivies) and the summits Little Konka (5982m) and Leduomanyin (6112m). All of these routes were first ascended along with teammate Yan Dongdong who after this successful expedition tragically fell to his death while climbing in the Tienshan range. This Piolet Asia, we're certain, is an important recognition and signal to remember Dongdong who was widely considered one of the leading lights of the new generation of Chinese alpinists.

The other two climbs nominated for the Piolets d’Or Asia were the Korean expedition comprised of Choi Suk-moon, Moon Sung-wook and An Jong-Neung who established a 600m variation up Denali (Alaska) to the famous Deprivation on Moonflower Buttress, and the Japanese expedition comprised of Kazuya Hiraide and Kei Taniguchi. The two winners of Piolet d'Or 2009 were nominated for their first ascent up Tibet's remote Namu-nani-feng (7694m) which they climbed via the SW Face before descending via the NW Ridge. This adventure - this 5 day traverse in pure alpine style - was truly intense and a great undertaking at altitude, just like all the other expeditions nominated this year. A style which multi Piolet Asia winner Denis Urubko knows all too well. It comes as no surprise therefore that he received this year's Achievement Award which, obviously, should be interpreted as nothing more than a stage in his (still) long mountaineering curriculum!