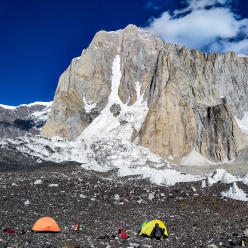 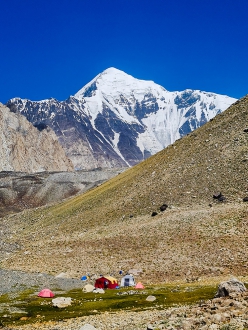 A small Georgian expedition comprised of Archil Badriashvili, Baqar Gelashvili and Giorgi Tepnadze has made two interesting ascents in the Rosh Gol valley in Pakistan: the first ascent of the Northwest summit of Saraghrar 7,303m and the third ascent of Languta-e-Barfi 6,833m.

In late August and early September 2021 Georgian mountaineers Archil Badriashvili, Baqar Gelashvili and Giorgi Tepnadze completed two big climbs in the Rosh Gol valley, in Pakistan’s Hindu Kush and on the border with Afghanistan: the first ascent of the NW face and NW summit of Saraghrar 7303m, and the third ascent of Languta-e-Barfi 6,833m.

Saraghrar has diverse summits, the highest being the NE at 7340m, first climbed in 1959 by an Italian expedition led by Fosco Maraini. Languta-e-Barfi on the other hand was first climbed in 1963 by a Polish expedition, and the Georgian team is the first to successfully reach the summit via the south face, after an attempt carried out in 2014 by Pat Deavoll and Chris Todd from New Zealand.

The acclaimed trio of alpinists tends to seek highly complex, lesser-known objectives in the Greater Ranges. These include the first ascent of Larkya Main in Nepal in 2017, Mt Shkhara in Georgia in 2018, Pangpoches I and II in Nepal in 2019, and Ushba & Ailama in the Caucasus in 2020. Badriashvili provided the following trip report.

GEORGIAN FIRST ASCENTS IN THE HINDU KUSH by Archil Badriashvili

Rosh Gol is home to four 7000ers, the highest of which is Saraghrar 7349m. Our aim was the NW face and Saraghrar Northwest, known as the highest unclimbed summit in the region. This had been attempted by large expeditions on three previous occasions. The Northwest face, which we found amazing, had never been attempted. The region has become very rarely visited since the Soviet-Afghan war.

After our Makalu expedition in the Himalayas, Giorgi and I found just enough resources to organise this small and flexible trip to this super-fascinating destination. This time we were joined by our friend Baqar. On 20 August we reached an amazing place for our Base Camp, and the area treated us as special guests for the following 25 days.

We acclimatised on Languta-e-Barfi, locally named as "the bride of Hindu Kush" and a beautiful, snowy peak 6,833 meters high. The route gave us the possibility to climb a big face within a short period of time. The face slope was one-and-half thousand meters high, which we "soloed" up on the first day. The ice was far from perfect, the day was too hot and we had to find a safe spot for our tent, which we did high up on the ridge. On the second day, a snow-loaded windy ridge offered a spectacular view onto the entire gorge led us to the summit. After half an hour and a moment of joy we quickly headed all the way down from the summit, via the same face.

Saraghrar on the other hand was a big adventure. The climb combined different kinds of terrain. We could only course only predict what it would take to breach difficulties on this huge unclimbed face. There was what we dubbed the NW Supercouloir, followed by a 20-pitch long wall of granite, a super tricky ridge and then the summit. An enormous amount of energy was spent completing the granite wall, where we spent 5 days, led one of our hardest pitches and resisted every harsh bivouac. We were lucky though and still felt well. Close to midday on 10 September we climbed the last pitch to the summit and enjoyed the pleasant, up-rushing atmosphere, accompanied by the winds. The choice of descent was obvious, down the same face. It was intense indeed, took one and half days and some 35 rappels, but it was all worth it. After 9 days we came back to the base of the peak, tired but safe in the knowledge that an amazing experience had ended in the best way.