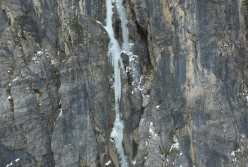 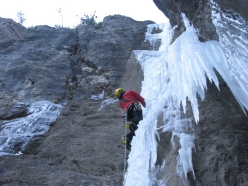 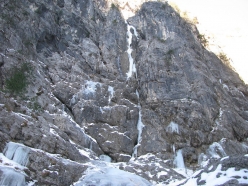 Winter mountaineering: first ascent video and interview with Romano Benet who, with Slovenia's Tine Cuder, made the first ascent of the new icefall Hysteria at Rio Vandul in Val Raccolana (Italy).

We mentioned Tine Cuder just the other day, when he teamed up with Enrico Mosetti to make the first ascent of a new ice climb in Valbruna. We’ve been talking about Romano Benet ever since we’ve been online, i.e. for the last 20 years if we consider that our internet experience began back in 1996. Romano Benet, born in 1962 in Tarvisio, is one of the strongest ad most experienced mountaineers in the world, with a penchant for high altitude Himalayan peaks. Furthermore, he has that hallmark class that true mountaineers are born with. This can be seen clearly with the new route he established the other day with Cuder at Rio Vandul in Val Raccolana, NE Italy. Established ground-up, the 135m ice climb breaches difficulties up to M7, WI6+. The belays are bolted and 4 bolts were added to the mixed pitch and another bolt was added to the WI6+ drip. All insitu gear was placed on lead.

Romano, how did you "discover" this new icefall?
A few days ago we climbed the Vandul icefall: Hysteria lies directly is just opposite. I hadn’t been in Val Raccolana since 2006, when Luca (Vuerich ed) and I climbed a series of icefalls. Since then, due to my illness and two hip replacements, I didn’t do too much. This year conditions have been exceptional, with biting cold even down in the valley. I’ve never seen so many ice climbers in my life.

Val Raccolana, a valley wedged between the Cimone massif in the north and the Canin massif in the south... they say it’s fairly wild. Is that how you’d describe it?
The valley isn’t isolated, but it is definitely the wildest in the Julian Alps. Unsurprisingly Ignazio Piussi came from that valley, there a tough bunch of people, and the valley doesn’t see the sun for several months a year. But it’s a paradise for ice climbing, if the winter season is a good one

You called your new icefall Hysteria... the name doesn’t seem to promise much good, unless it’s a reference to the film. How come you gave it this name?
It’s a little bit of both I’d say. The film, because the higher we climbed, the more exciting things got. But also because during the first abseil the rope got stuck, and we had to continue down with just one rope. For me, as a “Slav", abandoning gear on a route is a sacrilege.

How does it compare to your other first ascents (and in terms of beauty and difficulty, what can it be compared to)?
I'm not good at giving grades, if I manage to climb something it always seems easy. on the whole though, considering the mixed sections and the fact that we bolted it during the ascent, I’d view this as more demanding psychologically than physically. I let Tine grade the route. In terms of the ice and its beauty, I’d compare it to Equilibrio that I climbed with Luca (Vuerich ed) at Riofreddo that we graded 6+.

You’ve been ice climbing for many a year, you also happen to be one of the strongest around. The question therefore is: what has changed the most in ice climbing during the last few years?
It’s a question that I ask myself, too. On the whole, I reckon, gear has improved slightly, which means that one doesn’t risk quite as much as one did ten years ago. And this is a good thing for me... at my age I don’t want to hurt myself.

RELATED NEWS
13/05/2016 - Makalu summit success for Nives Meroi and Romano Benet
At 10:00 am on Thursday 12 May 2016 Italian mountaineers Romano Benet and Nives Meroi reached the summit of Makalu, their 13th eightthousander.