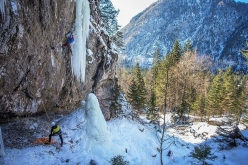 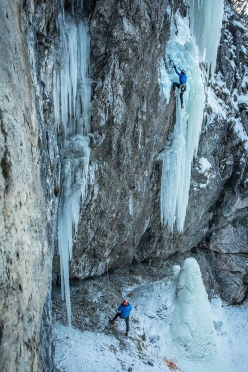 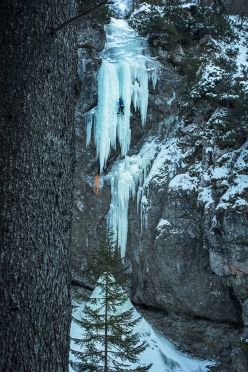 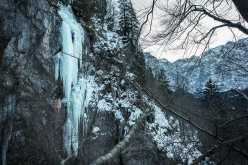 It all started a little by chance, after a day on the slopes at Tarvisio I decided to have a look at the icefalls in Valbruna that only rarely come into condition. I parked my van just outside the forest, the line I was after had formed well but what really got me interested were two hanging drips nearby. Despite wearing just my birkenstock sandals I walked to the base of the icicles, they weren’t dripping in the slightest and given the cold conditions, it was impossible that they’d continue to grow and touch the ground… I called some locals and found out the line had never been climbed before, good.

The following day, January 12, after climbing an icefall nearby that was in excellent condition (WI5/5+, 60 meters) together with David Limongi, we scrambled up through the steep forest and reached the top of the drips. I placed a bolt and started to abseil, from above the drips seemed even more vertical and steep. Between the two drips we added a belay and another bolt just a bit higher up in order to protect the start of pitch two, before this leads onto the dagger.

Dade and I began to study the pitch and discovered that fortunately the rock provided a thin, diagonal crack from left to right, all the way from the ground to the first dagger. I really wouldn’t have wanted to drill some holds. I bolted the pitch, not without difficulties, and begun working the moves; they seemed hard and complicated, the torques were pretty precarious... so I only managed two laps before it got dark.

I planned to return soon and even gave the line a name: Panta rei. This came about while discussing philosophy and mountaineering (?) after drinking several Campari with Fabio and Irene, the Rifugio Gilberti hut wardens at Sella Nevea.

In the days the that followed - and even as I write - winter conditions in the Julian Alps, across Italy and Slovenia, continued to be great and so Panta rei was put on hold. I wanted to go back quickly but, absurdly, finding partners in Tarvisio who want to climb ice of mixed terrain is extremely difficult, all the youngsters either train like devils in the gym, chase a ball or whizz past posts on the pistes. It's amazing how with the rich climbing tradition of these mountains, with the likes of Piussi, Lomasti, Benet, Meroi and Vuerich, no youngsters seem to have fallen in love with the noble art of mountaineering.

A few days ago, almost by chance, I happened to see some photos of Tine Cuder from Bovec, Slovenia, climbing an M8 in Valbruna, an old route bolted and then abandoned by legendary Mauro Bole Bubu and later freed by Luca Vuerich. I grabbed the opportunity and wrote to him, and we organized to meet up on Tuesday 24 January. Our somewhat unusual appointment for ice climbing was at midday, but at that time in Valbruna the temperature was almost -10°C.

We were joined by Tina Korinšek and also by Eddie Gianelloni, who took some pictures. We added the quickdraws to the first pitch and set to work and even quickly found the right beta, but then a hold snapped and this slowed us down… by now it was 15:30, I’d managed to climb the first pitch clean on top rope but not lead it and my arms were beginning to get pumped.

Tine set off with the right level of aggression for a last attempt and managed to free the pitch. He reached the belay and I seconded it clean once again. It was now my turn to climb the hanging drip. I’d never tried it, almost all of it was up ice, but drip was merely 20 cm wide where it touched the rock.

I started up through the rock and ice and, placing my ice axes as gently as possible, got established on the overhanging drip. Fifteen minutes later I finally reached the bolt I’d placed two weeks earlier.

The line is dedicated to my grandmother, my biggest fan, who died almost exactly a year to the day when I first bolted the climb.