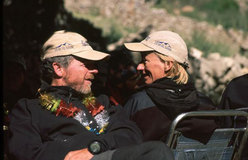 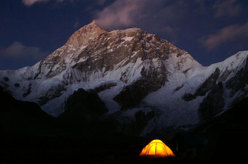 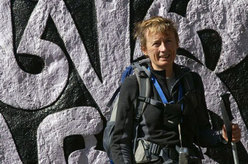 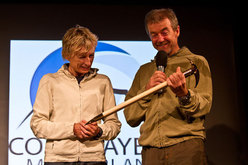 At 10:00 am on Thursday 12 May 2016 Italian mountaineers Romano Benet and Nives Meroi reached the summit of Makalu, their 13th eightthousander.

One step after the next, following a path that gradually unfolds and becomes reality. Nives Meroi and Romano Benet have done it together, both in life and on the eight-thousanders. Without any apparent differences, during "normal" days and during those climbing days that lead them to touch the sky, there where the mountains are the highest. We like to believe that their 13th 8000er was like this. Like a step made of countless other steps that form part of a journey that comes from afar away, that has the scope of exploration, that is never ending. And so the summit of Makalu was reached at 10am yesterday, Thursday 12 May, on a beautiful sunny day.

Nives and Romano had left the base camp on Monday 9 May. This is what Leila - Nives' sister and constant reference point for all their climbs - head to say about their ascent, "they reached C1 at circa 6600m, C2 at about 7400m and, blocked by the strong winds, yesterday they decided to stop at C4 at about 7650m. This morning, thanks to a beautifully sunny and windless day they crowned their dream of reaching the summit of Makalu (8473m). The first climbers of the day.” More information about the ascent is superfluous . Besides, this is the hallmark Meroi and Benet style. To which one needs to add one obvious clarification: on Makalu, too, they climbed "always together, carrying the tent, without high altitude porters and without supplementary oxygen.”

This is precisely how things have been on the other 12 8000ers they have climbed together. Starting with Nanga Parbat in 1998, their first of the 14 highest mountains in the world. The others followed in the same vein. Shisha Pangma and Cho Oyu in 1999. A world-class trio followed in 2003 which, in just 20 days, had them summiting Gasherbrum I, Gasherbrum II and Broad Peak. Lhotse was climbed in 2004, Dhaulagiri in 2006 as did, in the same year, the beautiful and moving ascent of K2; just they summited, alone on the mountain, with Nives becoming the firs Italian woman to ascend those legendary 8610m dreamt of by all mountaineers.

A year later, in 2007, the time came the mountain of all mountains, Mt Everest, and Nives became the first Italian to reach the highest point in the world without supplementary oxygen. Then, in 2008, Manaslu. And then in 2014, Kangchenjunga, perhaps the most beautiful summit of all. The one that marked their return to high altitude mountaineering, after their journey along the world’s highest mountains was interrupted due to Romano’s illness. It had all begun exactly 5 years earlier, on Kanchenjunga as it happens. They were “a stone’s throw" from the top, but Romano fell ill. Nives, which at the time was still in the running to become the first woman to climb all 14 eight-thousanders, decided against continuing alone. They descended together, actually, they survived together. At this point their ordeal began in earnest, their most difficult mountain of all, the most painful even. And once again they did so together. And their journey, their mountain climbing and the Himalayan giants, recommenced. Makalu is now theirs, a mountain they had already attempted in 2008, during the coldest and most difficult season, winter. Back then it was Nives who had needed some help, after having broken her leg. And now, after their 13th summit, only Annapurna is missing to complete the list of fourteen 8000ers. But who knows whether their journey will really lead them up there… perhaps it’s not even that important any more.

We do not know and we may never know what Nives and Romano really felt on the top of Makalu. We do not know whether they thought about their long journey, about the beautiful summit days and about those more difficult moments, when the top is distant and seems unattainable. Those moments, unrepeatable, are impossible to capture and share.. But we like to think that up there, with them, there was also Luca Vuerich, their companion on many adventures, both in the Himalaya and elsewhere. Actually, we’re certain he was… because the journey, this never-ending one step after the next, brings with it all there was in the past and also what will be in the future.