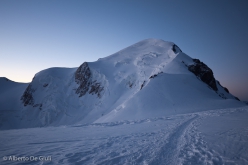 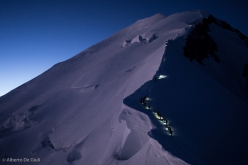 On Tuesday morning a plane containing two Swissmen landed circa 400 meters below the summit of Mont Blanc, before being intercepted by police.

On Tuesday 18 June two men of Swiss nationality landed a small Piper plane at an altitude of 4450 meters on Mont Blanc with the intention of climbing to the 4810m high summit. Equipped with ropes and crampons, the two were swiftly stopped by France's National Gendarmerie and after recording their details, the police allowed the plane to take off and return to Geneva, from where it had started its bizarre journey earlier that morning.

After having circed around the mountain’s east face the plane landed illegally in the Rochers Rouge area circa 400 vertical meters below the summit of Mont Blanc, and the behaviour was described by Eric Fournier, mayor of Chamonix, as an unprecedented "provocation". “It constitutes an intolerable attack on the high mountain environment and on all existing protective measures" added Fournier, who praised the Pghm for the rapid intervention.

At present it is unclear what precise offence had been committed. According to Swiss newspaper Blick, the pilot could risk losing his pilots license and a fine up to 20,000 Swiss Francs.