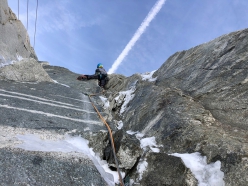 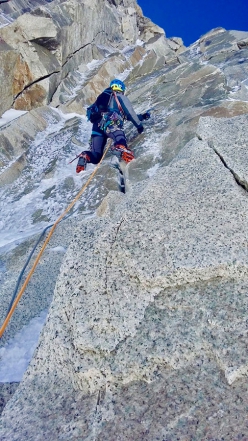 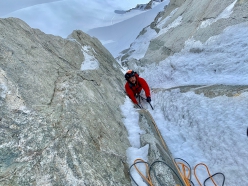 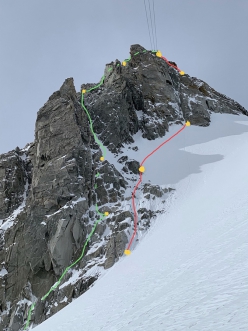 Spring proved decidedly strange, after an anomalous winter the season for steep couloirs passed by without the icy strips even forming! In May, however, some storms allowed the ice to come into condition and despite the season being almost over, we managed to climb some things. The problem was that the temperatures were high and consequently the chances of getting something done were limited to the day after the storm. Or on the very same day even, as temps during the day were top high and the ice started melting almost immediately! In this case it proved to be very important to be in the right place at the right time. Luck or skill, you decide!

Once again we managed to establish some lines close to the Torino hut, in a location where anyone who has climbed the granite satellites has passed, namely col Flambeau! More specifically, to the left of the col, where the pylon is located of the famous cable car that crosses Vallée Blanch, right on Gran Flambeau!

The proximity of these climbs to the mountain hut should not be surprising: in Chamonix for example lines like these, positioned close to the cable car and therefore with a very simple access, were put up over a decade ago. Striking examples are the routes below the walkway and those at Rognon; super repeated lines, equipped and climbable even in bad weather...

Opening new lines is always hard work and also expensive but serves to create bad weather alternatives, in order to not miss out on a day of climbing and also work! That's why these climbs were first ascended on Marbrées, as well as Koala Pirla with Alberto Corbella and La Vie in Rosa with Sergio Fiorenzano on Grand Flambeau. Certainly not to write pages of heroic mountaineering or for some utopian dream.

Often one has the habit of ignoring places one knows best, and this is a shame because it can provide many new, but above all beautiful, possibilities!