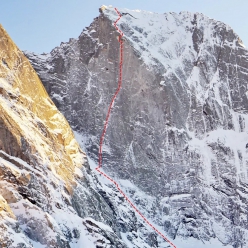 The British Route on Pizzo Badile repeated by Silvan Schüpbach and Peter von Känel on 17/03/2022. The famous Direttissima was the scene of one of the most important episodes in the history of female mountaineering when from 11 to 15 February 1982 the Czechoslovakians Zuzana Hofmanová and Alena Stehlíková made the first female ascent and also first winter ascent. Italy’s Fabio Valseschi made the first winter solo of the route in 2008.
Photo by Silvan Schüpbach, Peter von Känel 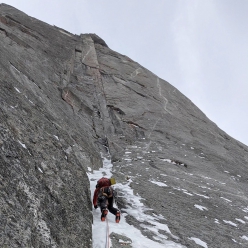 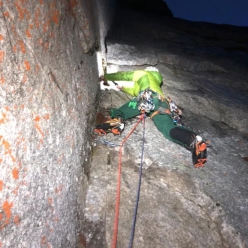 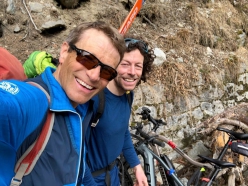 On Pizzo Badile in Italy Swiss alpinists Peter von Känel and Silvan Schüpbach have made a winter ascent of the British route, first ascended in 1968 by Mike Kosterlitz and Dick Isherwood.

Swiss alpinists Peter von Känel and Silvan Schüpbach have made a rare winter ascent of the British route on Pizzo Badile, Italy, first ascended from 8 to 9 July 1968 basically by mistake by Mike Kosterlitz and Dick Isherwood who had originally ventured onto the north face to repeat the Corti route.

Their famous Direttissima was the scene of one of the most important episodes in the history of female mountaineering when from 11 to 15 February 1982 the Czechoslovakians Zuzana Hofmanová and Alena Stehlíková made the first female ascent and also first winter ascent. In more recent times, from 17 to 20 February 2008 Italy’s Fabio Valseschini made the first winter solo of the route which breaches difficulties up to VI and A2-, or VIII free.

In December 2020 Schüpbach joined forces with Matteo Della Bordella to establish Crossway of Friendship on Pizzo Badile, dedicated to their friend Matteo Bernasconi, while last year Schüpbach repeated Nordest Supercombo with Cyrill Bösch and Pierre Chanut. It was during that descent that the Swissman came up with the idea of ​​attempting the British route as a modern dry tooling line.

Writing on his Instagram account, he explained, "We didn't know what to expect… But it seemed to me a cool drytool/mixed line which is not much condition depending." The two set off early on 17 March from Capanna Sciora with enough gear for a bivouac en route but, finding no suitable ledges for a bivy, they pushed on past M8 difficulties and reached the summit 22 hours later. They spent the night in the Redaelli bivouac, then descended to valley the following day.

Schüpbach concluded "… it was fully satisfying when we realised I was right. And, as a cherry on top, the rock is very good. The route offers steep climbing, easy to protect and excellent hooks. I dare to say it has the potential of becoming a extreme classic for hard alpine mixed climbing."