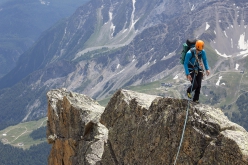 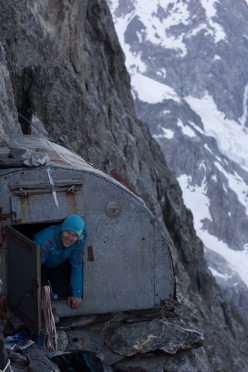 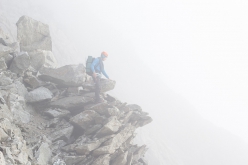 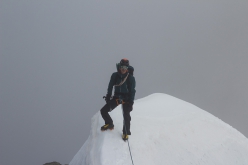 Peutérey Integral, the more interesting way to the top of Mont Blanc. By Jorg Verhoeven

Dutch climber Jorg Verhoeven talks about his ascent of the Peutérey Integral ridge on Mont Blanc, carried out with Martin Schidlowski from 13 - 15 July 2018.

What do you do between one stage of the Lead Climbing World Cup and the next? You certainly don’t climb to the summit of Mont Blanc. And you certainly don’t do it via the extremely long Peutérey Integral ridge. But this, last month, is exactly what was carried out by Jorg Verhoeven, the Dutch climber who in 2008 won the Lead World Cup and who in the meantime has climbed the spectrum, from hard boulders to huge big walls, checking in with a rare free ascent of The Nose on El Capitan in Yosemite as well as the first repeat of Dihedral Wall on the same monolith. Verhoeven climbed the Peutérey Integrale from 13 to 15 July together with his friend, aspiring mountain guide and 9a climber Martin Schidlowski from Germany. Although Verhoeven isn’t new to antics of this sort - in 2013 he spent a week climbing the Zillertaler ridge line on his own - this recent ascent directly from the plastic climbing wall to the huge walls of rock and ice on Mont Blanc intrigued us.

Having come to Chamonix ever since 2003 for the annual World Cup, I can't recall the countless times I’ve looked up at the granite spires and snow giants that rise from the valley. Some years I couldn’t resist, which resulted in ascents of Petit Dru (3733 m) and Aiguille du Peigne (3192 m), but also a trip with the Midi cable car which takes you to a stunning altitude surrounded by glaciers leading to the Mont Blanc (4810 m). The highest mountain in the Alps proves a strong attraction even to non-alpinists, and I always knew that one day I would want to summit. When I decided to compete in Chamonix this year, I knew the time had come and planned an extended stay. I was looking for something more adventurous than climbing Mont Blanc by either one of the normal routes (Trois Monts route from Midi or Gouter route from the valley), and as I came across the Peuterey Integral, which ascends from the Italian side, I was sold immediately.

Courmayeur on the Italian side of the Mont Blanc massif is quite the opposite to the French side: a small and less touristy town with even more alpine flair than its French counterpart. The rocky slopes and hanging glaciers of Mont Blanc and the Grandes Jorasses descend even steeper and wilder into the valley, creating a Patagonia-like scenery unparalleled in the Alps. With close to 4500 m of vertical ground, the infamous Peuterey Integral is dubbed one of the longest ridges in the Alps, covering rock, mixed and snow terrain and crossing several peaks before summiting Mont Blanc du Courmayeur.

During the World Cup I find out that David Lama, a close friend ever since I moved to Innsbruck, had teamed up with Roger Schaeli with the same goal, and when I phone him after his return in Chamonix, he bombards me with info and advice, repeating several times "It’s a nice little adventure, nothing too wild." I take this with a grain of salt, knowing David and his excellent alpine skills all too well. While waiting for my friend Martin Schidlowski to arrive from Innsbruck I enjoy some great polenta and pizza, and when we fall asleep in Val Veny it’s past midnight.

Stage 1: Aiguille Noire de Peuterey (3773 m)
As we start at 05:00 we take the first wrong turn possible and end up bushwacking before finding the normal trail up to Rifugio Borelli. Three hours in, we find ourselves at the base of the 1100 m high south ridge. Simul climbing the whole way, we pass several towers (named after alpinists like Brendel, Welzenbach etc.) with difficulties rarely reaching French fifth grade on mostly good granite. Route finding is tricky, with old threads and pitons leading the correct and incorrect way, so getting off route is part of the game.
Towards 15:00 we greet the summit Madonna, drink our last water and start rapping down the north face. These 350 m of steep rappels have posed the mental crux for many in the past, but David had already told us of the brand new (this season’s) double bolt 30 m rappel stations, which are the topic of discussion during our descent. Conclusion: they probably save lives but seem out of place in this wild environment.

Stage 2: Les dames Anglaises
Two English ladies in form of rock towers separate the Aiguille Noire from the Aiguille Blanche de Peuterey. Seen from Courmayeur as small spikes, they’re decently grown slender women made of choss rock, guarding the way to the bivacco Craveri. Coming from the Eastern Alps we like some good choss, and happily summit Pointe Casati (the first lady), before more rappels lead to Pointe Isolée (the second lady). We’re running late, and as we look forward to the bivy, we take the quicker route around l’Isolée, descending, traversing and ascending gullies. The bivy cabin provides us with a good but short night’s sleep, capping off a 15-hour day.

Stage 3: Aiguille Blanche de Peuterey (4112 m)
05:00 again; more choss, more scrambling and more altitude, gets us to the Aiguille Blanche, whose summits are divided by a half moon snow ridge. Crampons exchange climbing shoes; mist exchanges yesterdays’ sunburn. As a true non-alpinist, I’ve taken my light but blunt aluminium crampons, and a technical ice axe rather than a classic ice axe. Martin, a mountain guide in spe and a good friend, short-ropes me, so that if I fall, at least we both go down :-) More rappels (this time no bolts) until we hit the Col de Peuterey, which represent the upper platform of the Freney glacier. Views are astounding, with the north face of Mont Blanc showing off all his might, as well as the Jorasses, Dent de Geant and even Grand Capucin reveals itself. This is what I came here for!

Stage 4: Grand Pilier d’Angle (4243 m)
As we work ourselves up the easy side of the ‘GPA’ (i.e. more choss and steep snow), I notice the altitude is getting at me, and even Martin with plenty of 4000ers under the belt is going a bit slower. As we trudge up the final steep snow ridge (which is now 50° ice with a sludge layer) I’m cursing my crampons and must stop every 50 meters panting away, remembering David’s words about ‘a nice little adventure’. It’s just past noon as it suddenly starts snowing, but we’re not thinking about trouble until I hit the summit cornice and almost get blown off my feet.

Stage 5: Mont Blanc (4810 m)
Even though the route difficulties are over, we find ourselves in a whiteout snowstorm with a wind that barely has us standing. Ehm, where was Mont Blanc again? The tracks (normally a small highway) are completely covered in fresh snow, as we stumble in what we think is the correct way. As I’m thinking of frozen fingertips, we shelter in an open crevasse, to make an action plan. Since we brought sleeping bags and bivy gear, I propose to stay in the crevasse, but Martin convinces me finding the Bivaque Vallot is a better alternative. We take out the compass and see if cell phone GPS works. Roped up, we continue past the Italian summit towards the French summit, and as I get annoyed where the heck that summit is, Martin explains me that we passed it 15 min ago. "Didn’t I see these three people cuddling together on the top?" I’m a little sad I was on top of Mont Blanc without having noticed, the more happy I am when we finally find the bivy shelter, where a few Czech climbers greet us with fear in their voices. "Do we know the way down?" Ehm, yes, but today, no.

Stage 6: Descent
Once more 5:00 (getting sick of waking up so early), the French mountain guides accompanied by their frozen clients march into the bivy like a herd of elephants, explaining us ‘ze weather iz great!’. Since we’ve run out of food and gas somewhen yesterday, we’re happy to descent. As we walk through Chamonix eating French pastries, the next storm rolls over the mountains above us, making us think of those three cuddled together on the summit, hoping they made it down like we did. Mountains are beautiful, but can be ever so treacherous!

This is me after getting lost on the top of Mont Blanc in a snowstorm! In the past days @martinschidlowski and I climbed the famous 'Peuterey Integrale'. Check out my story for some impressions.